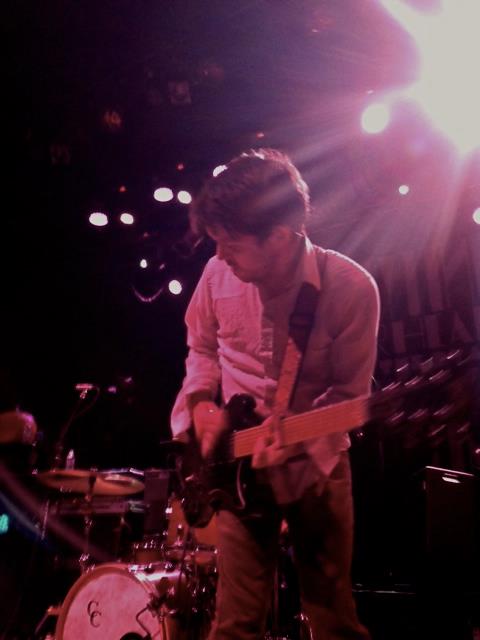 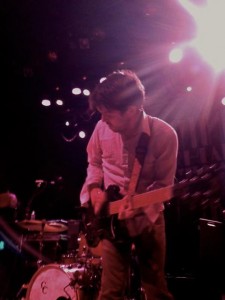 In a twinkle of starry lights, a pumpkin sat, glowing, declaring the band’s name: Cursive. The crowd went wild, screaming and fist-pumping, washing the stage with the kind of excitement usually saved for the headliner – that night, Minus the Bear – as singer and guitarist Tim Kasher took the stage with the rest of the band.

The calm-inducing lights suddenly made perfect sense at the Variety Playhouse in Atlanta that night, October 24, as the band swept into the slow and thought-provoking “This House Alive”, the first song on Cursive’s new album, I Am Gemini. But the band, an inarguable group of musical geniuses, knew not to dwell in the serene for too long. Suddenly, in a burst of nearly tangible energy, drummer Cully Symington ushered in “A Gentleman Caller”, one of the band’s older, more acclaimed tracks. Kasher’s ferocious screams – declaring the horrors of love – forced the crowd into an almost hypnotic sort of head-bobbing.

Cursive proved through the next few songs that they are a band that is obviously impressive on recordings, but cannot be fully appreciated until seen live. Their songs explore universal human experiences like love and loneliness, and the band’s deep personal connection with its dynamic lyrics became clear as Kasher strolled back and forth across the stage, simultaneously appearing to contemplate the complexity and emotions behind the words he sang and interacting with the entire audience.

With a slightly country/folk edge that kept the audience enthralled and impressed, Cursive reached the middle of their set with “Caveman”. This unique track was the ideal predecessor to “The Sun and Moon”, another new song, easily recognizable by its undeniable catchiness. Intelligently referencing the likes of Dionysus and Gommorah, Kasher’s voice – rising steadily, magnetically – kept everyone, on stage and off, dancing until the very last note.

Cursive put together their set list incredibly well; immediately following “The Sun and Moon”, a crowd favorite, came one of the band’s most well-known, praised tunes: “The Recluse”. The instrumentals during this song were superb, a hubbub of odd instruments like sleigh bells. These sounds meshed impeccably with Kasher’s voice, which could only be described during this song as a collage, alternating constantly from a nearly inaudible whisper to one of his signature strings of throaty screams. Just a few songs later, another old favorite, “Art is Hard”, kept the crowd drawn to the band as a series of string instruments were played and the tempo was lifted ever further in a chorus of almost jazz-like melancholy.

The band finished with a rendition of “Dorothy at Forty” – an interesting choice, as it is definitely a lesser-known track. However, Cursive’s use of this song to finish off a perfect set simply proves their ability to judge what an audience wants – the song was a final, explosive burst of loud energy that kept everyone moving until the very last second, especially as Kasher opened his jaws in an enormous yell that reverberated around the room.

Before Kasher and crew walked off stage, he made one last, unnecessary declaration: “WE ARE CURSIVE!” If anyone in the crowd hadn’t heard of Cursive before, they certainly knew who they were now – and would never forget.