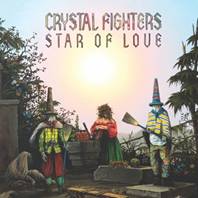 Crystal Fighters are officially in my head. If you haven’t already checked out their recent US release, Star of Love, you  should definitely get on it.

While you’re at it, be sure to see my review of their album here.

I got to interview CF (thank you, Atlantic Records!), and you get to read it! So here ya go:

EM: For those who have never heard you, could you describe your sound in five words or less?

EM: Give us a brief history of the band– I read that the name came from an opera Laure’s grandfather was writing- can you tell us a little bit about the opera and why you named the band after it?

CF: It was passed down to Laure after her grandfather passed away. He’d been secretly been writing it in his last days. It mentioned all sorts of Basque mythology, instruments and experiences. We started to investigate further and found the culture to be rich and intriguing, and that combined with the personal connection of an unfinished piece led us to make music inspired by these writings. One of the passages was called Crystal Fighters, referring to groups of young people in the opera, which is where we took our name from.

EM: Star of Love came out in the UK in 2010 and is now being released in the US. What has happened in that time for the band? Why the delay?

CF: I guess it takes a long time to get the word out sometimes, particularly having released Star of Love on our own label, Zirkulo, in the UK and licensing it to Europe. Since then we have been doing what we’ve always wanted- play a lot of gigs; we’ve been really lucky to play all over the world, from Poland to Australia, and we really can’t wait to come back to the USA to tour again soon.

EM: What is the theme of Star of Love?

CF: The unfathomable mystery of the universe, the turbulent journey towards being at peace with death, the triumph of love, and the omnipotence of the sun (SOL=Sun). All these themes came from the opera.

EM: What is next for Crystal Fighters?

CF: Now that the album is out in the USA, we can’t wait to come back and play. We are hitting the road May 21 and bringing friends IS Tropical with us. It’s gonna be crazy and can’t wait to hit all the cities we haven’t been to before, as well as our first time in Canada. On top of that, we’re writing our second album now, too.