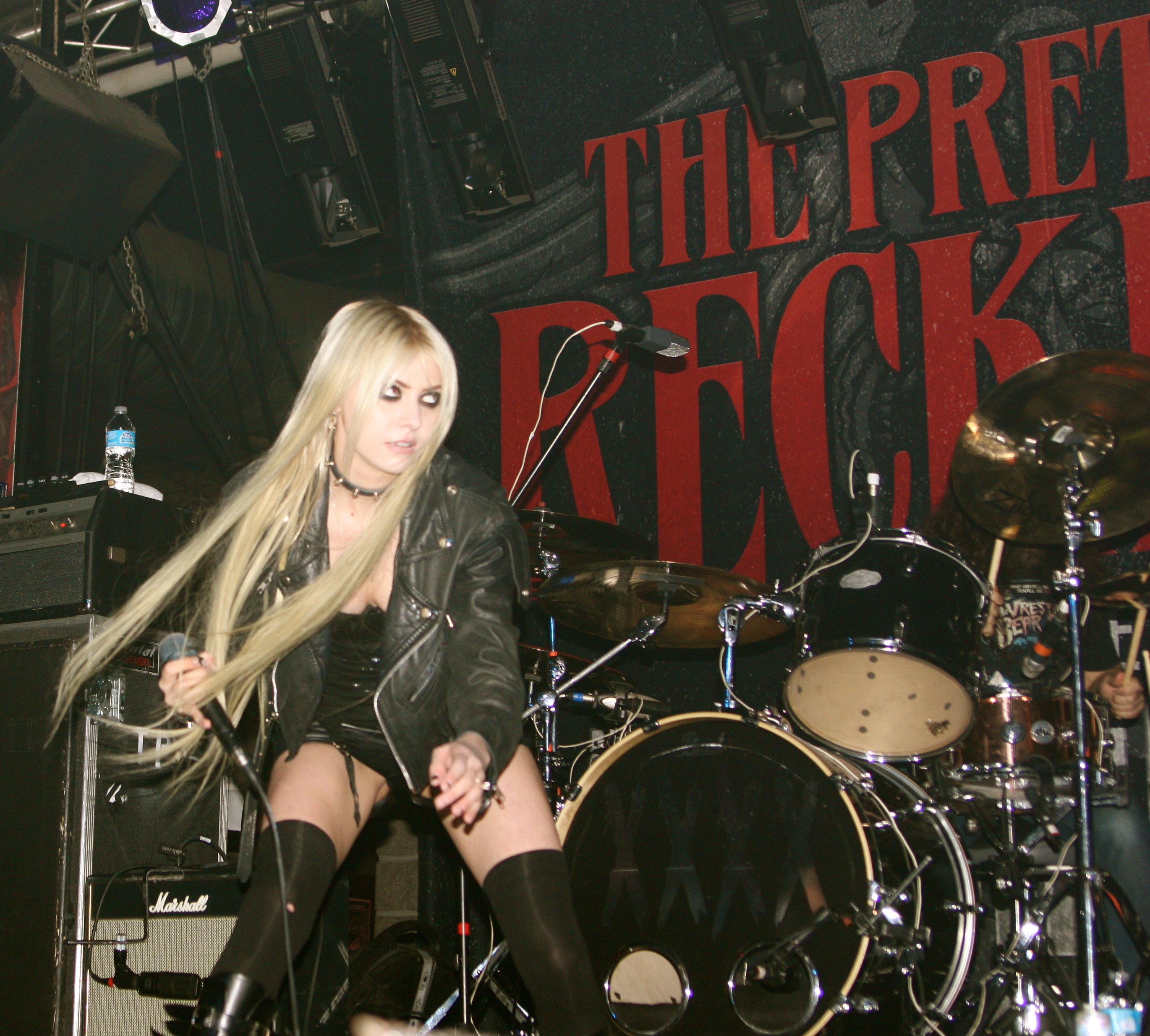 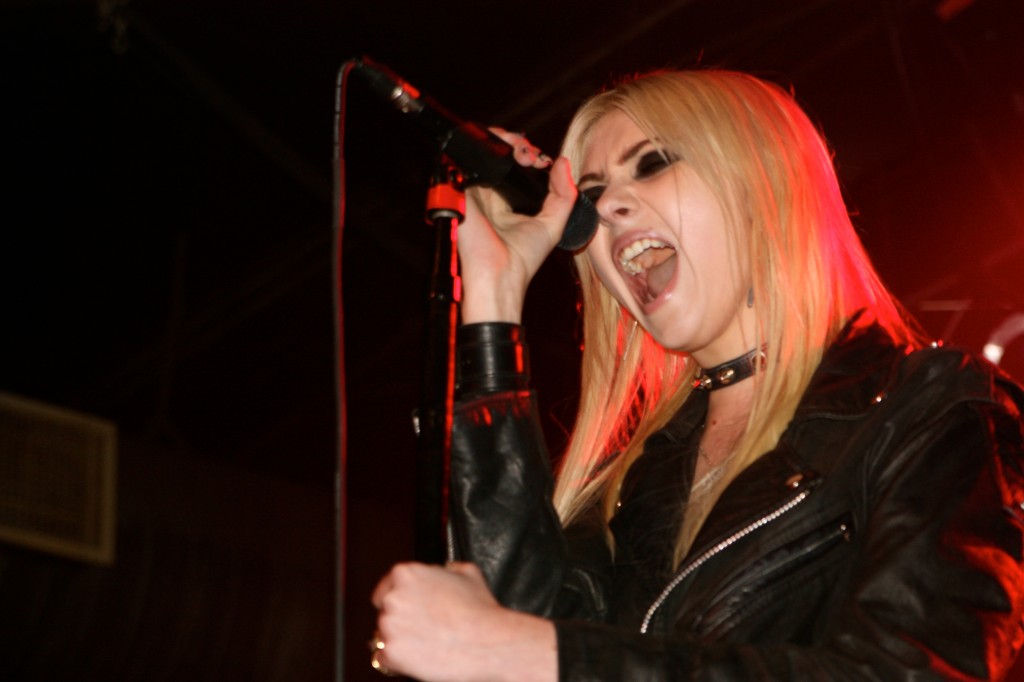 Alright.  So I just interviewed Taylor Momsen of The Pretty Reckless backstage at The Masquerade. Not gonna lie…I had no idea what to expect when I went into this interview.  However, besides the fact that we had to do the interview backstage during the opening act (where is the soundproof room?!), it all went down pretty smoothly.

Based on what I have read about Taylor, the last thing I expected was for her to be friendly (nice, sure…but downright friendly?).  She welcomed us (my videographer, Katie, and I) backstage and comfortably chatted with us while we got set up.  To put it simply, I really enjoyed myself during this interview.

As for the show…dude.  Ok.  Everyone talks about what Taylor does and wears onstage.  A lot of the buzz seems to be about how scandalous she gets.  However, people seem to keep forgetting to talk about the actual music.  Which, after having seen them live, I now find absolutely astonishing.

The girl can sing.  She gets up there and does whatever moves she does and wears whatever she wears to get the audience going, but the real “wow” moment for me was when she opened her mouth.  Undeniable voice.  Truly, truly talented.  For me, he pure talent of the band and her voice completely overshadowed her stage personality (which, in my opinion, is how it should be).

Go ahead and check out our interview below.  I’ve transcribed it as well as uploading the video, so bear with me on the dang sound issues.

EM: First, Hit Me Like a Man– Tell me how you came up with the name.

EM: So what about My Medicine? Is that personal experience?

TM: I had my first directorial debut on that video. That was a really fun video to shoot. It’s just a bunch of friends, and we just kind of threw it together very last minute. It’s literally kind of…what you see in the video is what it was with some crazy effects added on the top of it.  I try not to talk too much about the songs themselves, because I like to let people interpret them and take them how they want to take them.  I think I give enough in the songs themselves, but yes- the songs are very personal.

EM: You’ve been writing songs for a very long time. Are you still pulling songs that you wrote way back then?

EM: What are you doing with those songs?

TM: Leaving them and forgetting that they existed.

EM: You’ve been touring since 2010. Do you prefer being on the road?

TM: I love the road…I love playing every night. It’s awesome. But I love the studio. Right now, we’re in the middle of a headline tour, and then we’re jumping on with Manson for a month, and after that we’re going into the studio to start working on the second record. I’m excited for that. I mean, I love touring, but I love being in the studio, too to take a breather and get back inside of my own head and have some time away from the rest of the world.

EM: Are there going to be any songs from this EP on the record?

TM: Possibly. Possibly all of them, possibly none of them- I don’t know yet. We’re still writing the record, so I think you’ll have to wait and see.

EM: Do you have any idea when that would be coming out?

TM: I don’t. I unfortunately do not control the release of things. I just write the songs and record them and hope it gets released…they’re not all written. You’ll have to wait and see. Believe me, I’m more stressed out about it than you are.

EM: What are you listening to lately?

TM: I heard the new Soundgarden single, which is pretty cool. I’m excited that they’re getting back together. I can’t wait for the new record. That’s what I’ve been listening to- old Soundgarden, new Soundgarden…lots of Soundgarden…Die Antwoord- they’re a rap band from South Africa that is pretty awesome, and they make really cool videos. Check them out. I’m kind of boring. I listen to the same stuff over and over again. You know- Beatles, Zeppelin, Who, Pink Floyd, ACDC, Soundgarden..Audioslave, Soundgarden…

EM: Are you channeling anyone when you go onstage?

TM: No. Me- I’m channeling me. It’s more of a performance aspect of myself, but it is myself.  I don’t have some crazy alter ego or anything. It’s very much me. That’s it- I’ve played enough characters.

EM: Speaking of that, are you ever going to act again?

TM: I’m so not even thinking about it. It’s certainly not in my near future. To say what the rest of my life will entail I don’t know, but it’s certainly not even on my radar.  I like writing. I like writing records, and I like writing songs, touring, and playing in a band. It’s amazing. It’s awesome, so why would I want to do anything else? Unless Rob Zombie calls, and then we’ll talk about that, because that would be awesome.

EM: Besides your acting and writing, do you have any other creative outlets?

EM: What do you miss while you’re on tour?

TM: I miss New York a lot. I love New York, and I definitely miss it.

EM: You seem so nice! Why do you think you have such a harsh reputation?

TM: I think I’m nice! Tabloids spin all that stuff around. But thank you! You’re nice.

8 thoughts on “Backstage with Taylor Momsen of The Pretty Reckless”