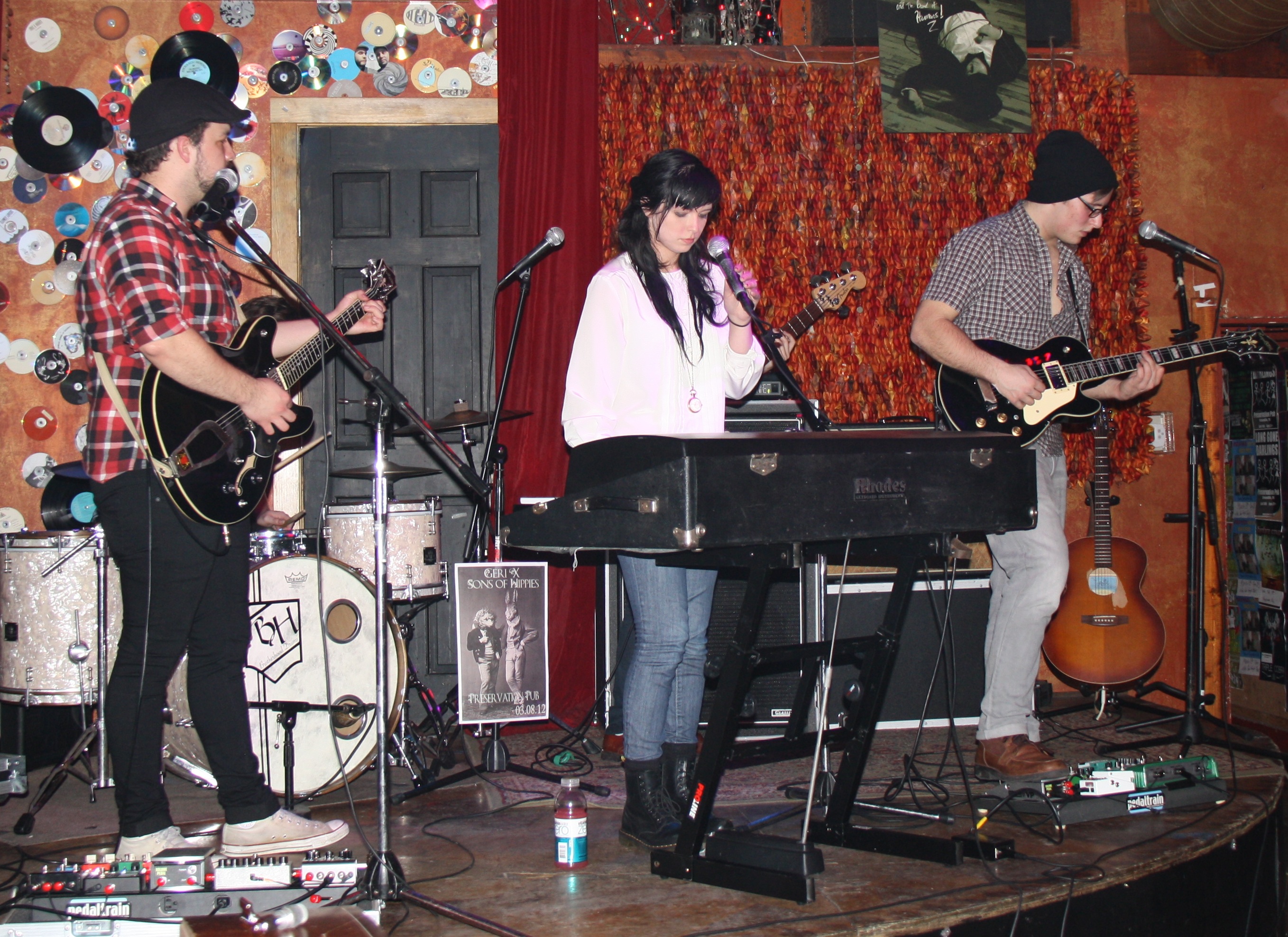 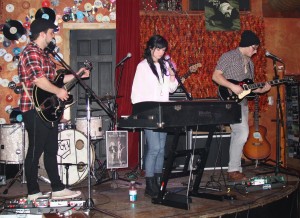 e, and I’m sitting in the back of a dingy Knoxville bar[1] with J-14 Magazine’s featured “hot band” Belle Histoire. But I’m the only one in the bar who knows this about them. “I didn’t even know about,” Wes Comer, the band’s drummer, insists. The rest of the band, save frontwoman Jane Smith, who gave the interview to the magazine, seems pretty mystified by it as well. Bassist Mitch Winsett remarked, “I saw someone tweet about, and I was like, ‘Wait, we’re with Justin Bieber now?’” The crowd in the bar, like the majority of Knoxville bar crowds, is a grizzled mix of regulars peppered in with grungy dive-bar clichés, none of whom seem to even know what the hell J-14, let alone indie-pop-rock, is.

But that’s okay with Belle Histoire[2]: they’re not looking to please or cater to any particular demographic. As Jane Smith said, “We just write what we write.”[3] They say that they play “indie-pop-rock,” but Jane sees it as something broader: “I…best describe our music as relatable…We collectively write […] about other people’s feelings, like how everyone feels going through [these human experiences].”

The band began as kind of a solo-act, with Jane’s brother urging her to record some songs that had gone unused in her previous band Formulas. From there it grew, with future members Aaron Hunt and Wes Comer adding more musical muscle to the songs that later became the band’s first EP Spirits, a comparatively stripped-down, piano driven collection.[4] After that, Belle Histoire quickly materialized, with Austin and Mitch quitting their previous bands to join the project. “Literally, within a week, we were all just like, ‘Screw the other stuff! We love this!” Jane says.

Their latest EP, I Can Tell, is a fuller, more collective effort, reflecting a more intentional musical aesthetic: the band trades the folk-rock gloom of Spirits for driving guitars, sugarsnap chords and catchier choruses. Aaron Hunt sees the second EP as the band really staking out its sound: “On the first EP, Jane had these songs written, and what happened just happened. And on the second EP, we wanted to take a more intentional route…these were songs that we put together as the band.” The band describes it as a combination of influences ranging from Bruce Springsteen to Coldplay.

The sound of the second EP is also indicative of changes in Jane’s life as well: “every song is about something I go through. You can tell throughout the EPs when I was happy and when I was sad. Like, on the Spirits EP, it’s like ‘I hate my life, everyone sucks’…and then, like, the I Can Tell EP was ‘I hate my life, but that’s okay!’”

The band is currently in the studio recording their first full-length record, which the band said will be a continuing evolution of the sound the band formed with I Can Tell, “pushing the guitars [on some songs] in a more straight up rock direction…combining it with some [more] interesting percussive elements that tie in with our sound.”

But tonight, it’s all about Spirits and I Can Tell, with the band deciding to wait to debut the new songs, the setlist even lacking a cover. The band runs through every one of their songs in about 35 minutes. While on record (or audio file or whatever), the songs sound particularly unsuited to a grungy Southern bar, sounding more like they should be played in the background at some hip coffee shop, the band transforms them live. The fullness of the band’s new sound, courtesy of Ausitn and Mitch, infects the cuts from Spirits, elevating their folkish leanings to a more aggressive, spiky, and appropriately, given the weather outside, stormy sound. At the same time, it also brings back the charming bite of Spirits to the newer tracks, the live environment allowing them to be played without the bubblegum production, making them sound a little darker.

While the regulars stick to their barstools for the majority of the show, what started as an empty floor slowly begins to fill as Jane’s voice bounces and shakes off the walls, any strain of the timidity heard in the early recordings gone as she pounds her keyboard and belts her lyrics. While they may paint themselves as a pop-group, Belle Histoire’s live sound, aggressive, charmingly sloppy[5], is just plain rock and roll. The songs are still pretty, the piano still hypnotizing, Jane’s voice still soaring, but in a way that feels more natural and way more interesting. It’s no wonder that they could be signed to a hardcore label[6], be picked as J-14’s “hot band” and still convincingly be billed at a cramped Knoxville bar.

It’s nearing the end of the show, and I need a picture of the band from a different angle, so I try to climb on a bench that’s leaning against the wall. As I try to climb up, it creaks; I freak and move away, glancing furtively to make sure no one caught me in such an idiotic pose. Jane Smith sees though, almost laughs, but simply shakes her head. I shrug my shoulders. She likely thinks I’m ridiculous now. It’s a weird moment, one that can only occur at these small dive-y shows with no audience. There have been others at other shows, but this one feels like one I’ll hold onto because it seems like others will likely follow J-14’s lead in the coming months.

Belle Histoire’s full-length is expected to be released this summer on InVogue Records. If you want to catch them live, they’ll be touring leading up to the release of the record and in promotion of it thereafter. Check them out in a smaller, rawer setting.

To hear the band talk about their day jobs, what it’s like to be on a hardcore label, and the evolution of “Cougar Rock” listen to the full interview with Belle Histoire here.

Also, a special thanks to actress Angela Morris for the use of her camera to cover this show.

[1] Preservation Pub is a kind of hipster-honky-tonk hybrid, with crazy hallucinatory lighting and a narrow floor plan that shoves patrons toward the stage. The bar caters to acts ranging from minimalist art rock to folk to trashy eighties cover bands, but this is the first time I’ve ever seen a straight indie-pop act take the stage.

[2] The name translates to Beautiful History, for those of you who were curious.

[3] Although the band’s guitarist Austin Livingwood feels that he writes music geared toward the, let’s say, more mature female listeners, a genre he likes to call “cougar rock.”

[4] Jane described the first EP as kind of being “singer-songwriter Jane Smith and her backing band.” Think a more fun-loving Florence and the Machine without the indie pretentions.

[5] I mean this as a compliment: rock and roll is not Beethoven or Chopin, it’s not about precision or sounding exactly like the record. It’s about attitude and sound and feeling, which is something Belle Histoire’s live show adds more of to their songs.

[6] Belle Histoire are currently signed to InVogue records, whose lineup includes such bands as City Lights, Famous Last Words, and Before Their Eyes. In other words, bands with a lot more screaming and breakdowns than pretty piano and the word “pop” in their genre label.

3 thoughts on “Drowning in Knoxville with Belle Histoire”