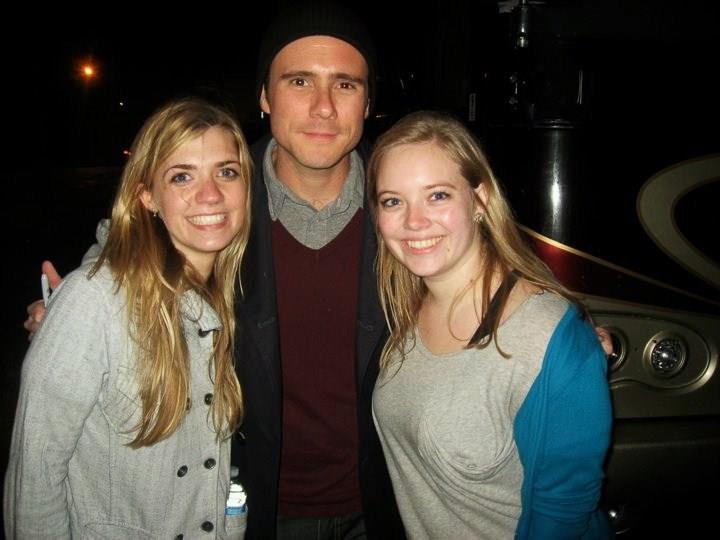 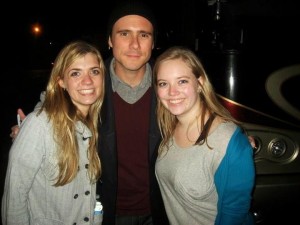 Living on my own in college, I take advantage of my independence by bailing on school every time a band I love goes on tour. Doesn’t matter the day or how far the drive is – I’m gonna be there if I love them enough. I definitely love Jimmy Eat World enough.

The show was in Athens on a Monday night…3 hours from my school. I had a 9:00 class the next morning. NBD. I called my best friend and fellow JEW freak, Katie (a student living in Athens), and that was that.

Predictably, the show was fully worth it. Pretty much blew my face off. In the middle of the show, guitarist and vocalist Tom Linton handed me a water bottle. Yeah….. it’s still sitting on my dresser.

The water bottle would have been enough.  I was perfectly happy with that being the highlight of my night.

Until I met the rest of the band (way to bury the lead, right?)

Katie and I decided to wait outside the trailers in case they came out. Weirdly, there were only about 15 or so other people willing to brave the cold and wait around. First to emerge was Rick Burch, bassist, toting an impressive case of Terrapin Beer. (Brewed locally in Athens. Obviously, these guys have sources).

After some nervous hesitation, Katie and I approached him. We spent about 5 minutes geeking out over the show and making no effort to play it cool. However, once we regained our composure, we actually ended up having a simply delightful conversation.

Next out was Zach Lind, the drummer. He was the chattiest of the group, laughing with us and talking to each fan individually. He wanted to know where we were from and what the cool places to hang out in Athens were. He asked us all our names, and thanked each of us for coming out.

Once Zach and Rick peaced out and loaded themselves onto the bus, it seemed like the night was over. We were hoping to get to meet or at least catch a glimpse of Jim Adkins or Tom Linton, but it didn’t look like they were going to show.

After awhile, the small crowd got even smaller, and people started to give up and go home, one girl declaring, “If Tom or Jim show up, I’m going to hate all of you.”  After about five minutes, out comes Jim Adkins.

When Jim showed up, people got a little weird. Now, I always thought that I was a little bit of a weirdo/creeper/nerd about music. When I love a band, I know the members’ birthdays, follow them on Twitter, watch their documentaries, read their biographies, and basically memorize everything there is to know about them. And I have found myself being distressingly uncool on the few occasions that I was lucky enough to meet some of my idols.

However, even compared to myself, I was unaware how obsessive some fans can be.  Not to mention how presumptuous.

Back to when Jim showed up. We all crowded around him. Everyone wanted one-on-one face time, and everyone abandoned their nonchalance and gave in to near hysteria.

One dude, particularly star struck and shaky, told Jim that he had given Zach a gift intended for the band. The gift, he said, was a nickel and a dime (for those of you who don’t get this- and don’t worry, it’s a stretch- the lyrics to one of JEW’s songs called Futures are “we close our eyes while the nickel and dime take the streets completely”). Jim was gracious and appreciative, and the coin guy was elated.

One group really surprised me. I would never presume to critique the way a band designs their show. I appreciate that they put a lot of work into their set lists and their performance.  Not everyone sees things that way. (Do I sound pompous? Unintentional).

There were a whole lot of “I wish you had played…” and “I can’t believe you left out…” comments registering complaints about the set list. Many people attempted to make Jim promise to play their personal favorite songs at their future shows. He politely promised to do the best he could to try to satisfy them next time around.

Finally, one girl said to Jim, “Ask Tom to come out.  Not that meeting you isn’t great, but meeting Tom would just change my life.”  Um….. Seriously?!

Jim took it well and made a joke that Tom was already inside wrapped up in his Snuggie (which he later confirmed was a vicious, vicious lie).

Tom never came out.  But even so, I can tell you that Jimmy Eat World, apart from being one of the best groups I have seen live, is one of the nicest, friendliest bands ever. They truly love and appreciate their fans – no superior attitude.  I’ll never forget the night I met them, and, though I didn’t meet Tom, at least I can say I have his water bottle.

5 thoughts on “Jimmy Eat World: Sometimes You Can Meet Your Idols”