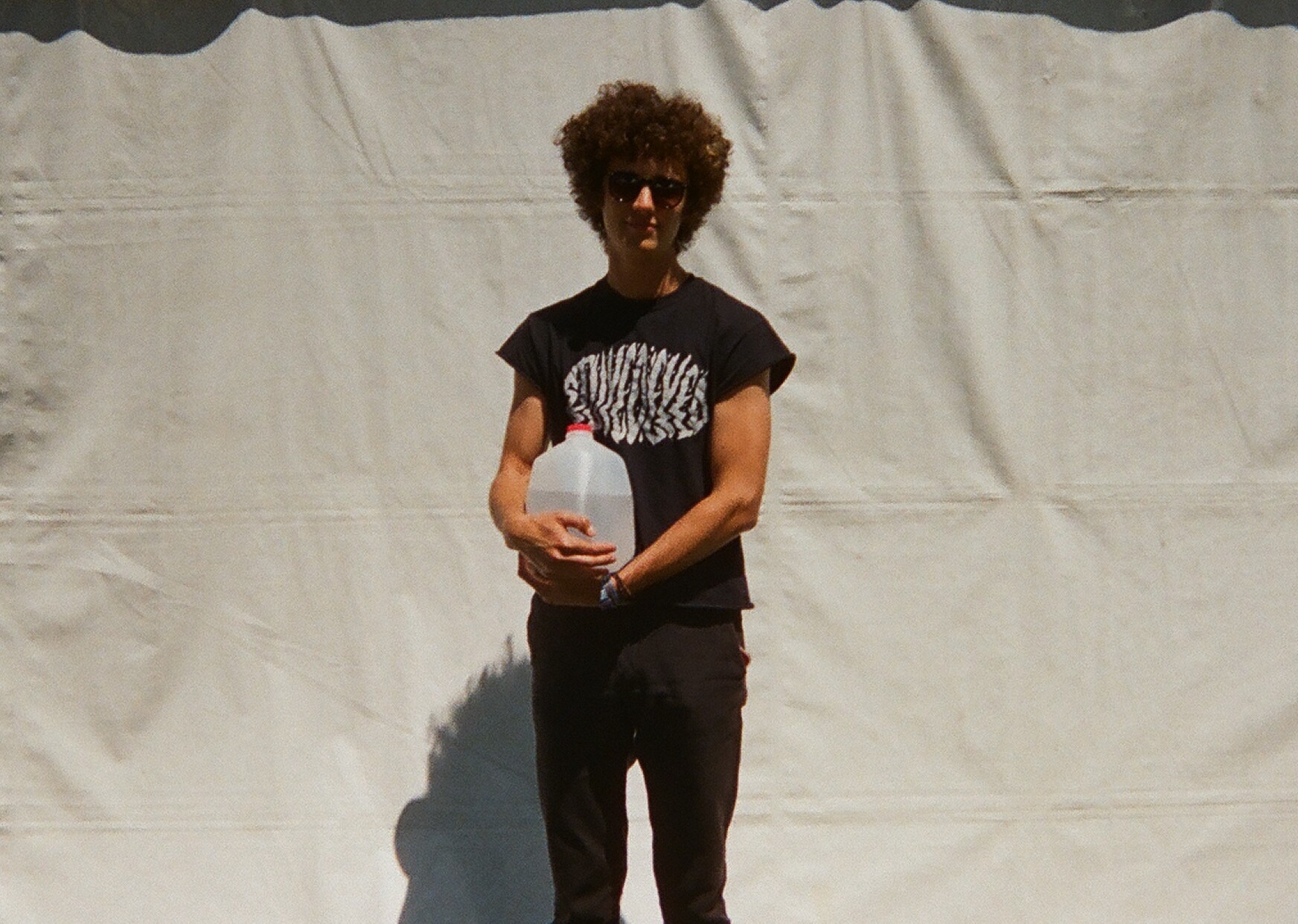 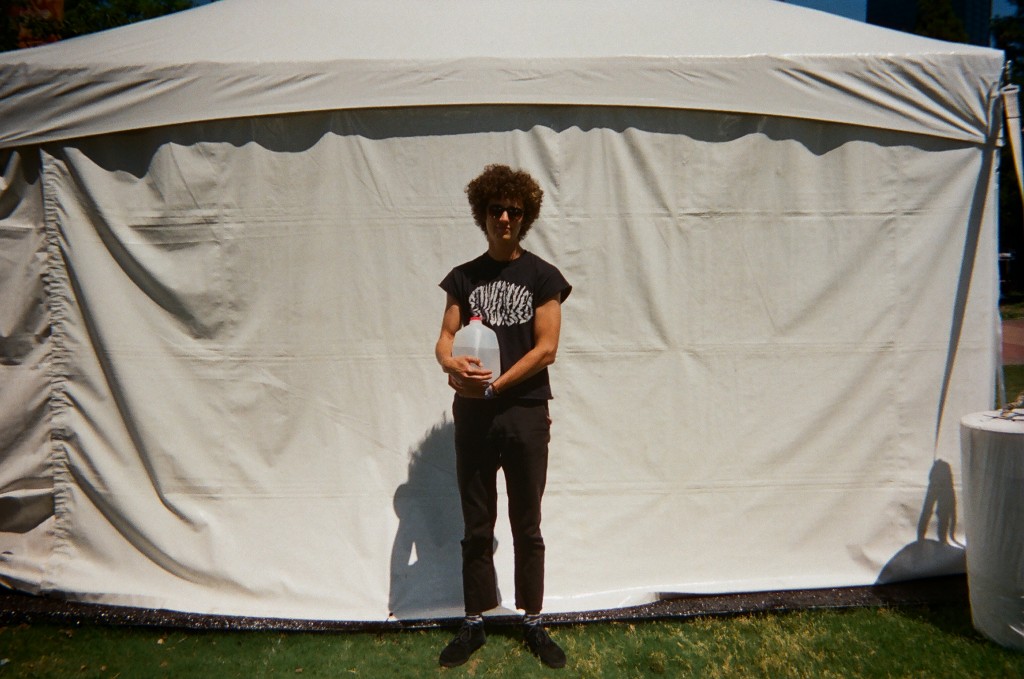 Every sound has been explored. So the thing it comes back to is, what can you contribute to the world? What can you actually give to people that is beneficial to them or can better their lives or make them think or make them feel?

Ron Gallo is calling us out.

The ex-Toy Soldiers frontman recently released his first solo album Heavy Meta, an aggressive departure from his roots Americana past.  The album’s heavy, energetic garage rock vibes may make it impossible for you to sit still in your seat, but they’ll knock you right back down again if you pay any attention to the lyrics.  The Nashville by way of Philadelphia artist’s debut is a raw and poetic expression of frustration, holding a glaring mirror up to societal issues, sometimes ironically, and oftentimes more harshly.

I sat down with Gallo at Atlanta’s Shaky Knees Music Festival to discuss Heavy Meta and where he goes from here.

Vinyl Mag: Who are you most excited to see this weekend?

Ron Gallo: J. Roddy [& The Business]. On Thursday, we did the kickoff party with FIDLAR and Twin Peaks. And they were both amazing, and then they were the two bands I was most excited to see again. We caught FIDLAR again, and we missed Twin Peaks, because we were parking. Third Eye Blind for sure. I would say Ryan Adams, but he’ll probably cancel an hour before his set. I actually want to see Hamilton Leithauser, because I was a big Walkmen fan.

VM: Do you have any go-to Atlanta activities?

VM: Can we talk a little bit about the concept for “All The Punks Are Domesticated”?

RG:  Before I moved to Nashville from Philly, I had a job cleaning houses for the last six months that I was there saving up for the move.  Basically, the job was getting up early, and you would team up with one other person, and you’d hit four or five houses in one day. And all of the people I worked with were all these punk rock kids. Just punks, through and through. We were cleaning houses, and the girl would be wearing this shredded punk rock tee and have all these tattoos and play in her punk band, but she would talk about her student loans, or like, “me and my boyfriend just got this apartment, we’re financing this new car, I’m trying to go to med school.”  And it was just this really funny thing, like the aesthetic of the lifestyle in comparison with just listening to her talk about all of these…I shouldn’t say her, because it was multiple people, but it was kind of the same experience…and then the title came to me.  Then at the same time, I was in Philly, and I didn’t know what I was doing in my life at all, and I had this sort of underlying misery just trying to figure it all out and making music and having my frustrations with that as well.  So the title came from that, and then I kind of put it all together with my feelings about the current state of music and the world.

VM: In your bio, you said that Heavy Meta was “the first few findings from my guerrilla treasure hunt for bullshit.” What kind of bullshit did you uncover?

RG: A lot. So like, externally in the outside world, “Why Do You Have Kids?” and “Kill The Medicine Man” are comments on outside things. And also, “Kill The Medicine Man” is an internal confrontation. But also, “Poor Traits Of The Artist” is tongue-in-cheek me bitching about how hard it is to be an artist in the modern day, in a whiny but a self-aware way. So “Why Do You Have Kids?” was just seeing things in the street, like bad parenting. “Put The Kids To Bed” [is about] sort of being in stagnant, complacent, dead relationships, and we’ve all been there, and I’ve been there. It’s all pretty reflective of just starting to dig in and look at the world around you and look at yourself and be like, “it doesn’t need to be this way.  Let’s get to the bottom of what’s bothering you. Let’s get to the root of the suffering.”  And then look at it, and confront it, and that’s how you can start to overcome it.  So that’s really what the record is.

VM: Tell me more about the creative process of the record as a whole.

RG: I kind of just like to live it in a way. Just kind of living with it and looking for things.  For example, “Why Do You Have Kids?” was a very clear creative process, because it was just seeing something, asking a question in my head, walking a couple of blocks, and then the song comes out—words first and then music. Not always words first, but for the most part usually that’s how it goes.  I don’t like to limit it to one thing. Certain songs on the record—”Poor Traits” and “Put The Kids To Bed”—started as I took a Casio keyboard, and I pressed play…I found a fake drum beat, and I let it loop for three minutes, and I went and played bass and created this musical bed. It’s always different. I think lyrics are the most important part to me, and that’s something that you can always be thinking about. Notes in your phone and voice memos and stuff, and then kind of see how it comes together.

VM: You’ve said that you believe the universe is in all of us. What does that mean?

RG: Well, it is. I do believe there is a sense of oneness.  There is no difference between you and I or anyone else or any other living thing.  Even when you kind of look at the way that our bodies work versus the way the universe works, they’re almost mirror images of each other.  We are all composed of atoms that work together for a greater good, and that’s the same as the universe…also just the idea of perspective: that the universe only exists because [we are] here to experience it.  Without us, it’s not there—and not in a self-centered way, but in a unifying way. It’s about realizing the limitless potential people have, the capability to become a part of that and surpass this distraction, material world bullshit that we reside in.

VM: Back to “Poor Traits [Of The Artist]”—it does call out the artist. It’s intentionally meta. There is a line “is luck a pursuit worth pursuing.” Do you think this is all luck?

RG: No, actually. Not anymore. I think for awhile, especially at the time, it seemed—even what we’re doing today, being here at Shaky Knees sitting in this room on a beautiful day—seemed like an impossibility. Like, how do you get there? How do you put records out?  How do you reach people?  Like, it just seemed like an impossible task, for doing it for eight years with not much quote-unquote reward. So I guess when I wrote the song, and I was frustrated about it, it seemed like it came down to luck, just being at the right place and the right time.  But I think the realization, too, was that it just comes back to what you’re making, and it’s music.  Nobody needs it.  Nobody ever needs to hear what any person ever needs to say.  It’s been done a million times.  There’s millions of bands that all have something to say.  Every sound has been explored.  So the thing it comes back to is, what can you contribute to the world?  What can you actually give to people that is beneficial to them or can better their lives or make them think or make them feel?  So it just comes back to doing that.  It’s not really luck.  Make something that is meaningful to you or that really hits with somebody, and it will work the way that you want it to. And I think that the God’s honest truth is that, if it’s not working, it comes down to what’s being made. I don’t think anybody that’s ever done anything earnest and good that had even a bit of a work ethic just completely went unheard forever. Sometimes it’s a longer road. But that would be a really sad story. I just don’t think that it happens like that.  I think it’s just making good shit and being down to put the work together and not giving up. Luck can expedite the process, but it’s not the be-all end-all.

VM: Do you write on the road?

RG: Always. We started recording this random concept EP that came out of nowhere. Our friend Chris had this idea, and he called me and told me about it.  It’s like an extension of Heavy Meta.  It’s kind of based around using puns, and it’s all about the music industry. It’s gonna just be fun and this lighthearted concept, extension of Heavy Meta, and then we have a lot of the next album pretty much written and worked out. We play some of the songs now, and we’ll probably start recording that soon.

Ron Gallo is currently on tour in Europe and gearing up for upcoming US shows with Twin Peaks followed by a west coast tour with White Reaper.  Dates below.