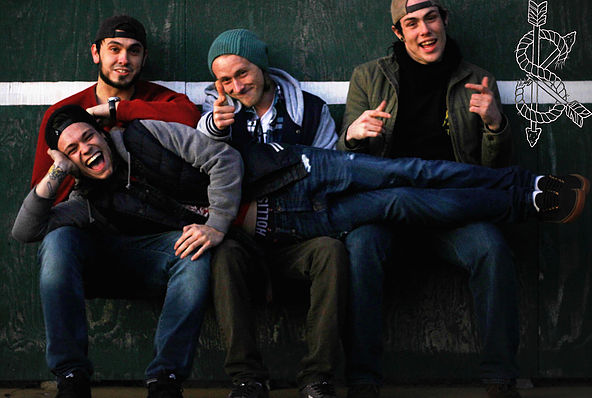 Tuesday, March 7, a stellar lineup consisting of Survival Kit, Chapel, Too Close To Touch, and Waterparks hit the stage for a sold-out show at The Masquerade, Purgatory. The show was alive, the tunes were danceable, emotions ran high, and crowd surfers were prominent throughout the night.

As a fairly new fan of Too Close To Touch, I knew from first time I heard their song “Crooked Smile”—off of their most recent album Haven’t Been Myself—that I had found one of my new favorite artists. So naturally, when they announced a co-headlining tour with Waterparks back in December of 2016, I immediately committed to attending.  On top of the headliners, knowing Athens, Georgia natives Chapel were also part of the package sealed the deal. Because what’s better than supporting a band from my hometown? (Chapel’s catchy single “Caught Up” captured my ears the first day it dropped, as did their most recent song “Fools Gold.”)

Another band that has majorly captured my attention as of late is Survival Kit, an alternative rock band hailing from Atlanta, Georgia who jumped on as an opener for this show. The quartet consists of Travis Blake on lead vocals/guitar, Andrew Lynn on guitar/vocals, Billy “Two Times” Kilgore on bass, and Allen Beck on drums. Although the band is fairly new, having formed in summer of 2015, they are no strangers to playing music. They’ve previously played in bands together over the years, which eventually led to some of them going on tour and others opting for college.

In the fall of 2016, the band released their first EP titled Hard Work and Dedication (tracked, mixed, mastered by Aaron Pace of AP Audio in Alpharetta, Georgia). Prior to their show, I had the opportunity to talk with the guys about musical influences, artists they recommend, and what’s next.  Check out our Q&A below.

Travis Blake: All aspects of life.

Andrew Lynn: Negative situations usually spark my ideas, and I use my writing to find a light at the end of the tunnel.

Billy Kilgore: I get influence from all types of music and styles.

Allen Beck: Random things I hear and see inspire me, and the music just pops in my head at times.

2. Who are your biggest musical influences?

AL: Circa Survive and HRVRD.

AB: The Story So Far and Four Year Strong.

BK: The Used and Nirvana.

TB: Say Anything and Panic! At The Disco.

AL: Quit our day jobs and tour the country. We’re getting closer to being able to do that every day.

4. If you were to tour with any artist, who would it be?

AB: The Story So Far.

AL: Panic! At The Disco.

5. How has your music evolved since you first began playing together?

AL: When we began writing it was very pop punk, but as we have progressed we are coming out with a well-rounded rock sound that we are very excited about.

AL: We are currently in the studio and plan to release a new single in the upcoming months called “Stranger Things.” We believe that we have found our sound, and now our goal is to write a record that will set us up for a healthy music career.

7. Was there any particular artist, show, or moment that made you realize that music was something you wanted to pursue?

AB: Performing on the road with Come Down Denver.

TB: It’s the only thing I’m good at and can enjoy on a regular basis.

BK: When I got my first guitar after waiting for like a year.

AL: One time my dad told me that performing music wasn’t a realistic career path.

TB: The Used and Taking Back Sunday.

AB: The Story So Far and Four Year Strong.

9. Are there any artists/songs you are currently listening to that you recommend others check out?

May 29 – The Masquerade – Atlanta, Georgia