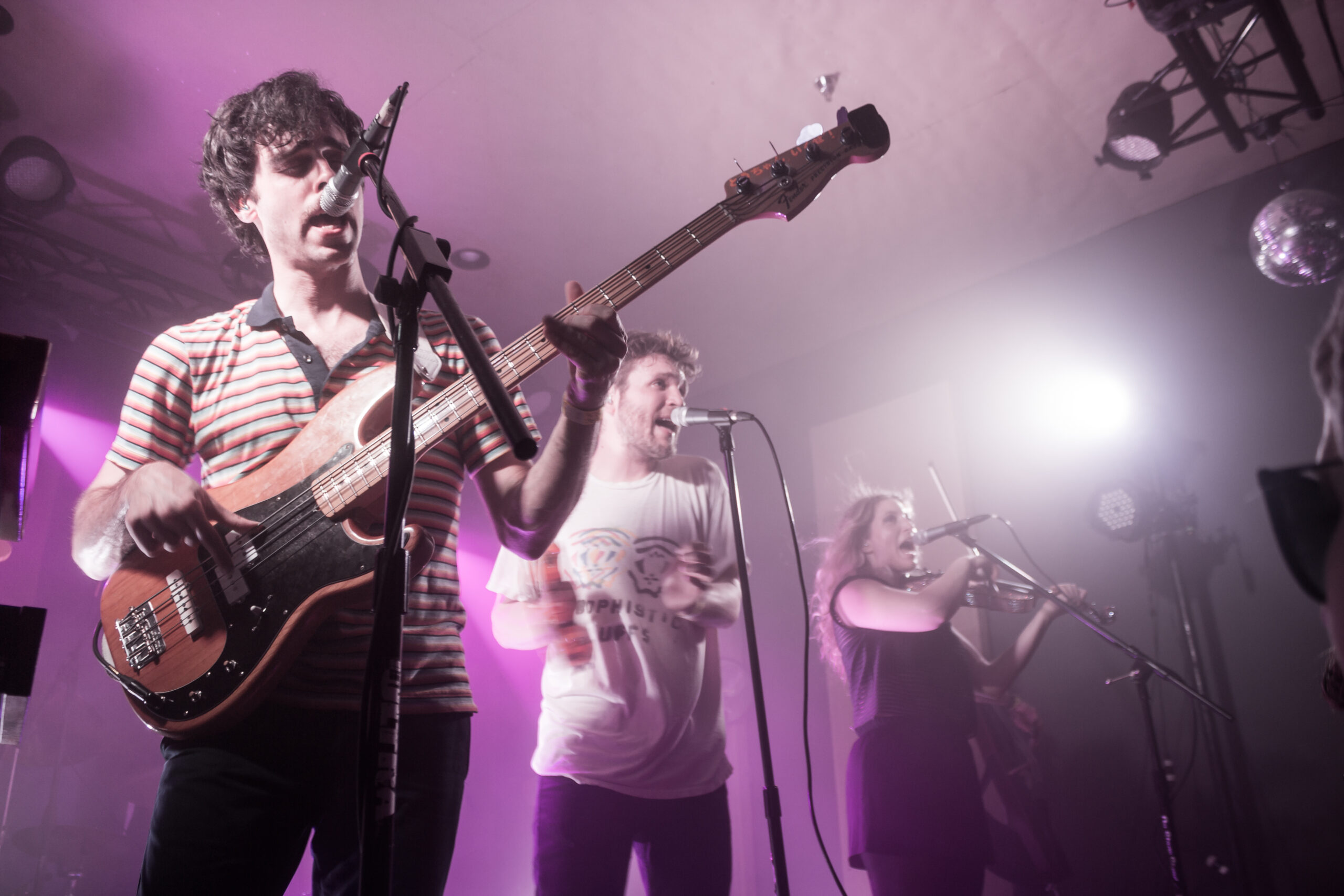 When Ra Ra Riot announced they were hitting the road to promote Need Your Light, I was anxious to see how the new material would translate to the stage. When I heard they’d be bringing Sun Club AND PWR BTTM with them, I was ecstatic. Then I found out these three would be playing steps away from my humble abode, so it only made sense that it quickly became the hottest ticket in town…Safe to say the ATL was in for a treat.

With all the press this band has received over the past six months, I was prepared for a letdown. The hype machine is a monster and has the ability to create novelties out of anyone with a hint of talent and quickly reduce them to a fading trend. I was worried I’d see into the eyes of the beast, but PWR BTTM put that notion to bed in about a minute and thirty seconds. They’re playing their first round of SXSW showcases this week and they’ll be one of the hardest acts to see. Usually I’d say you should never wait in line longer than ten or fifteen minutes to see a band at South by, but they’re different. Fresh. Dramatic. Unapologetic about their in your face queer agenda. And I like it.

Ugly Cherries is the best song I heard last year. The finger tapped riffs are replicated with ease under the lights and the drums are even heavier in person. Their song 1994 has been following me everywhere over the last few weeks, so I was happy to belt out a few ooooh woo oooh oohs as they tore through that track. I haven’t seen a band shred like this since my last Diarrhea Planet show – but Liv and Ben do it with one guitar. I was most impressed with their ability to flawlessly harmonize through complex rhythm changes throughout the set and put together the right amount of peaks and valleys present on their full length record. The makeup and gowns were on point too: A+ in the wardrobe department.

What I really enjoy about PWR BTTM is they sing about the same things all bands do: love and heartbreak, loneliness, having fun and wasting time. The only difference is they tell it from a perspective that few people want to have a conversation about. The true power of their music is that they’re getting to the bottom of how society views gender and homosexuality. It’s just a bonus that it happens to be really great rock & roll.

You gotta eat the pops…

Sun Club stepped on stage looking mismatched and a little confused. In setup, they appeared to struggle with where everything was supposed to go, and it took at least a song before all the cables were assigned to their respective 1/4” jacks. Even during their set which includes two drummers, loads of vintage gear, an ironing board, and a collection of antique dolls, they look more like a yard sale than a band. If any of the thrifty Ra Ra Riot fans who sold out the two hundred plus capacity venue were looking for a bargain, they came away with a steal in Sun Club.

The Baltimore five piece played through their debut full length, The Dongo Durango with a maelstrom of energy. When the house lights lowered, it was as if these guys became conduits possessed by some supernatural presence and the audience was treated to a live exorcism. Bassist Adam attempts to shake the demons loose from his head while drummers Devin and Kory beat them into submission. Shane almost speaks in tongues over psych-surf guitar licks while Mikey bounces around the stage, crying out heavily delayed chants from his soul. The whole show is an experiment in chaos. It makes sense that they recorded most of their album live, because I can’t imagine these dudes sitting still for longer than ten or fifteen minutes.

In the end it all comes together for Sun Club. Amidst the room rattling drum beats and driving bass lines, their punchy guitar tones pierce through the walls of reverb to provide sophisticated melodic support for the sometimes spastic vocal rhythms. For a band with little apparent structure, they are able to corral all the moving parts just long enough to produce a cohesive musical experience that can only be described as fun.

Thanks guys – I had a damn ball.

The night closed out with the seasoned headliners providing professional level entertainment to the sold out venue. Fixtures of the indie music scene for over ten years, Ra Ra Riot have become a polished collection of musicians. Their unique brand of classical infused dance-rock almost sounded too big for the room – like we were part of an intimate listening party. Rarely do I leave a show in awe of the musical talent of a band, but they seriously impressed me. Something about violins and cellos inserted into a rock band changes everything – it sounds complete, composed, and purposeful. This band pays attention to the details.

The set list was heavy on recently released Need Your Light, which translated nicely to the stage, but included hits like Dance With Me and Beta Love to the delight of all. It was Ghost Under Rocks however that got everyone moving and put arms in the air.

Over the years, Ra Ra Riot has put together a catalog of songs for any emotion. They hit on all of them tonight.