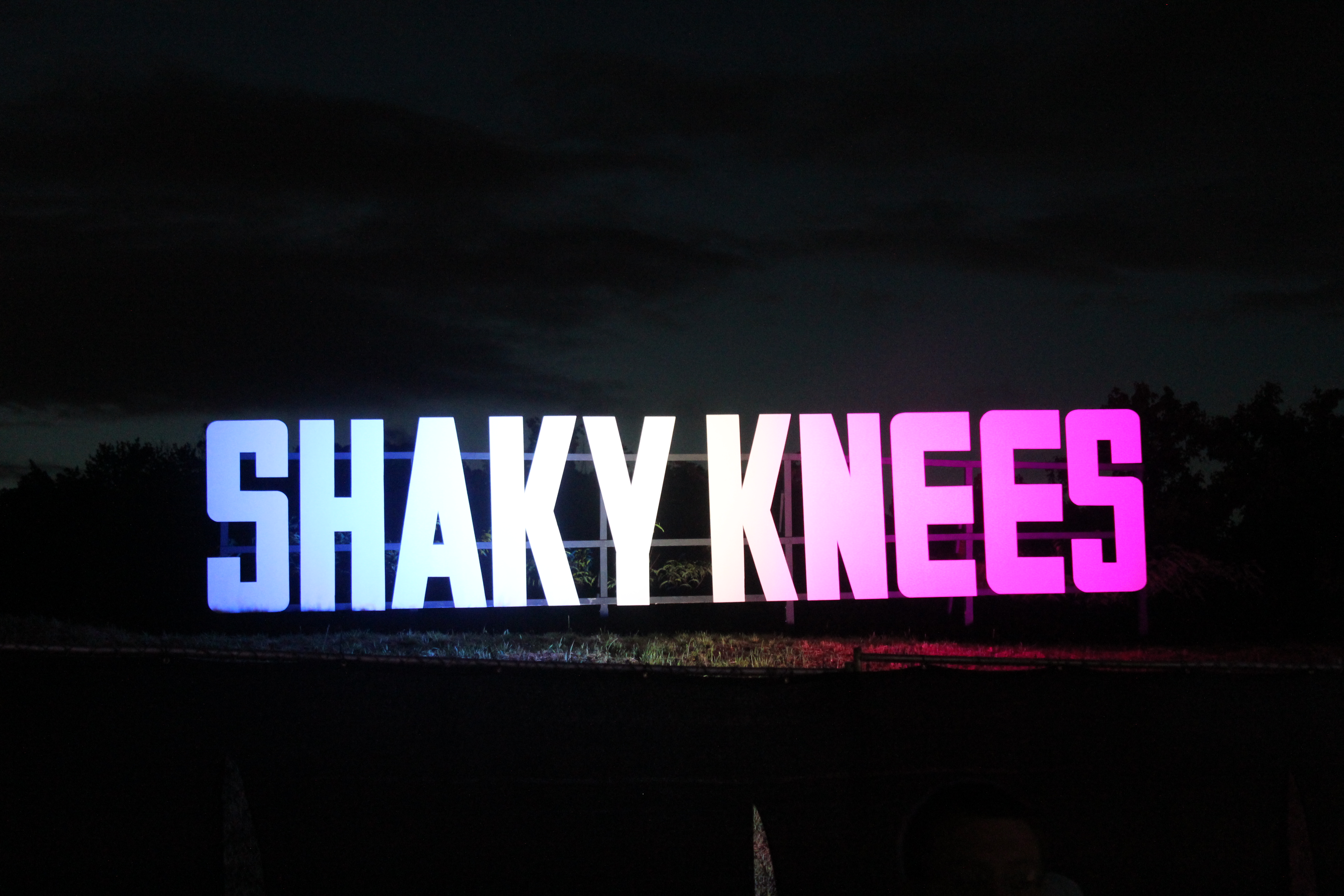 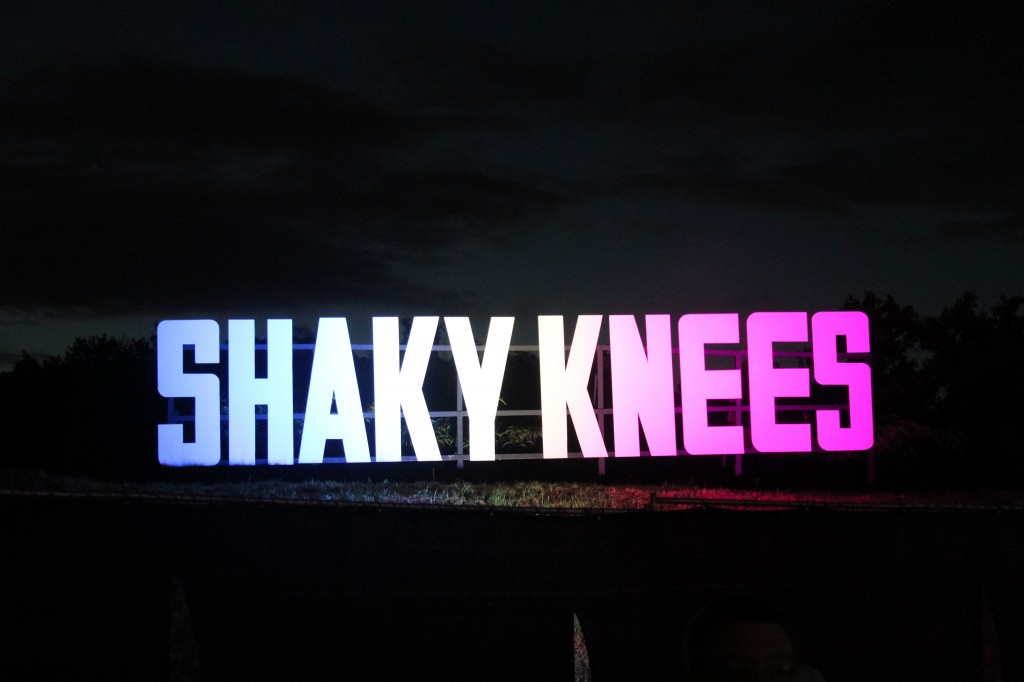 If you live anywhere close to close to Atlanta, you should have been at Shaky Knees Music Fest this past weekend.  In just two years, Shaky Knees has solidified its position towards the top of Atlanta’s music landscape.

The lineup is incredible (you’ve got Modest Mouse, The Gaslight Anthem, Cage the Elephant, Blood Red Shoes, The Hold Steady, The National, Spoon, The Replacements, Cold War Kids…getting tired, and you get the picture. Awesome bands), and the location is unbeatable – three full days in Atlantic Station, right next to shopping (you know, if you didn’t come in your fest best, and you need to run up and grab something with fringe at H&M) and tons of restaurants if the food truck line is too long (it always is).

Shaky Knees was a rain-soaked, over-crowded roaring success, and it’s safe to say that it will only grow from here.

First, let’s just say it – parking sucked.  It took about 45 minutes driving around the Atlantic Station parking deck to find a spot.  Plus, $20 per day.  Boo.

Though we unfortunately missed our hometown heroes, The Whigs, we did manage to grab an interview with the band about their Shaky Knees experience.  Read on!

Checking in was painless – all in all, it took maybe 10 mins. The box office was located right there at the gate, making it easy to get in and out with little to no confusion – a rarity at a large music event.  It blows when you get up to the gate only to find out that the press check-in is a mile away, in the middle of nowhere, and you have to answer three riddles from a sphinx before you can get your bloody “media” credentials.

At check-in, we immediately ran into Steven Yeun (Glenn from The Walking Dead).  He was super nice and let us grab a “super fast and secretive” pic with him.

After being nerds and posting some sort of “OMG LOOK WHO IT IS” Instagram photo, we got in the gates just in time to catch The Gaslight Anthem’s energetic set while receiving evil glares from patrons who were there all day and were absolutely soaked. Throughout the night, we continuously heard horror stories of rain-soaked cell phones and cameras.

Gaslight played every song you would expect to hear from them (all the greats) and played for a large and thoroughly grateful audience.  Totally teared up during “Blue Jeans and White T-Shirts” for a second.  It’s fine.

This was the first set we heard, and it set the tone for the weekend.  After that, we headed backstage to meet up with Blood Red Shoes, who we were scheduled to interview earlier in the day but decided that none of us was willing to miss The Gaslight Anthem’s set. While waiting for the interview to start, we ran into Brian Fallon, the lead singer of Gaslight (and one of the most approachable people in the business, I might add.  What a bro).

Here is a picture of us looking totally unhinged by how excited we are:

After fulfilling our dork-out fan duties, we met up with Blood Red Shoes in the rain soaked, pitch black press tent.  Read our interview here.

Parking was easier, only because we decided not to park at Atlantic Station. Caught Tokyo Police Club, who were every bit as energetic and enthusiastic as they’re hyped up to be. We promptly ran away from the Peachtree stage to avoid any ear assault from Dawes (sorry…just not a fan) and discovered Phox on the Boulevard Stage, which provided the perfect soundtrack to an asphalt-backed power nap. From Phox, we motored over to the Piedmont stage to check out Portugal. The Man, who we’ve waited a long long time to see. In fact, this seemed to be the most difficult decision of the weekend: Portugal. The Man or Cold War Kids.

I’m just going to sum it up – the bands that were not the headliners of the days mostly only had time to play their big hits back to back to back, with little to no room for any obscurities.  And, you know what?  At a festival, that’s perfectly fine.  Festivals are not made for all of the bands to play a full-blown set.  Festivals are sampler platters.

Conor Oberst was next, and he was just so Conor that there’s really nothing else that needs to be said.  If you’ve seen him ever, “solo” or with Bright Eyes or Desaparecidos, you know.

One of the most anticipated sets of the weekend came from The Replacements, who brought along Billie Joe Armstrong for fill-in duties. The Green Day frontman dressed the part, abandoning his signature black button up and tie for hippie hair and a bandana.  Just the cherry on top of an already brilliant show.

Jenny Lewis is perfect. That’s all.  Jenny, please sing me to sleep every night and awake every morning.

The highlight of Saturday and really the whole damn thing was Modest Mouse.  Seen first from the photo pit and then later from the VIP upper deck of the Dos Equis tent (powerful friends), the performance catered to the Modest Mouse super-fan.

Rather than playing just the radio hits, they added a handful of unexpected tracks to keep the fans on their toes. The most surprising was the encore, starting with “Satin in a Coffin” and then quickly killing the energy with “The Whale Song” before announcing, “we’re done” and walking off stage and out of our lives.  “The Whale Song”?  Really?  Felt like such a waste of an encore, as everyone was jumping around screaming and then quickly had their excitement bludgeoned by mind-numbing instrumental.  Not. An encore song.  A mid-set filler song at best.

Sunday brought sunshine/sunburn and demonstrated for the first time the only real downside to having a festival on city pavement. What started out as an anti-mud blessing during the rain was later a heat-reflecting curse once the sun decided to show up.

Deer Tick made everyone forget their desperate quest for shade as soon as they came on, and then they brought out their number one fan and bandwife, Vanessa Carlton, to sing a song (whaaaat?!).

We headed over to the Boulevard Stage to give The Weeks a second chance to win us over after seeing them in Athens a couple months ago. The guitar player wore a “Hammerin’ Hank” Braves jersey, but even that wasn’t enough to reconcile us to the Caleb Followill-esque frog vocals coming from leader singer, Cyle Bones. Swing and a miss.

Blitzen Trapper gave us all a taste of their America, and it tasted like warm beer and sweaty brows.  Glory.

Iron & Wine was packed, but the larger Peachtree stage seemed to overwhelm their brand of coffee bar music. Honestly, it was hard to hear anything unless you were lucky enough to be in the photo pit. Once the first three songs were over, and the photographers were thrown back into the general audience, the set was pretty much over for our ears. This was the most talked-through set, as everyone just gave up on trying to hear and started socializing and using the time to run to the bar for their sixth Dos Equis of the day. Iron & Wine would’ve been better suited to the Ponce de Leon Stage.

Next was The Hold Steady, who took the stage with a refreshing blast of energy. They seemed genuinely excited and surprised by the crowd support. We went from being lulled into a heavy-headed lullaby daze to raising fists and beers to the sky and hoisting a certain Editor-in-Chief up to surf the crowd all the way to the stage. It was a good note to begin closing down the weekend. We ran into the guys later on and snapped a picture after they recognized the Editor of Vinyl as the crowd surfer from earlier.

Though our festival thirst had been thoroughly quenched after our raucous mosh-session with The Hold Steady, we knew we couldn’t live with ourselves if we missed indie darlings Local Natives, so we headed back to Peachtree stage one final time to close out our weekend properly.  Be sure to check out our interview with the band about how awesome they are live and how much fun they had playing the festival.

2. Gaslight Anthem (may be tied)

Ponce de Leon – in addition to being the most intimate stage of the festival, it had the best sound and generally the most energetic crowd.  Plus, you didn’t have to be front row to get a good view of the stage, which was a struggle at all of the other stages.

Boulevard was the most secluded stage. It felt very shoved in the corner, as if it was the “everyone else” stage for leftover bands.

Best discovery of the weekend: Houndmouth.

No idea, because the lines were atrociously long.  But we did drool over this girl’s fries, and she said they were from The Fry Guy.  You don’t even know (unless you do).  Those fries looked incredible.

Beer and drinks were easy to get – there was a drink station everywhere you looked. Food from a truck was not easy after 5:00, and the U-shaped layout of the Food Truck court created a impossible nightmare of unending and intertwining lines.

It seemed like Shaky Knees may have been a bit oversold. There were a few times, particularly later on in the day and at night, when it felt like we were moving through a mosh pit, when actually we were standing well off-stage. If it was personal space you were after last weekend, you weren’t going to find it. Capacity may have been a tad overestimated. The fest was almost too big for its britches this year and may find itself in the position of finding a new venue in years to come; particularly if it stays true to its roots.

All in all, Shaky Knees is a very refreshing festival to go to and attracts a lot of like-minded individuals – kudos to The People in Charge for putting together a lineup that encourages that sort of camaraderie. This is not Music Midtown 2.0, and I think everyone is grateful for that. 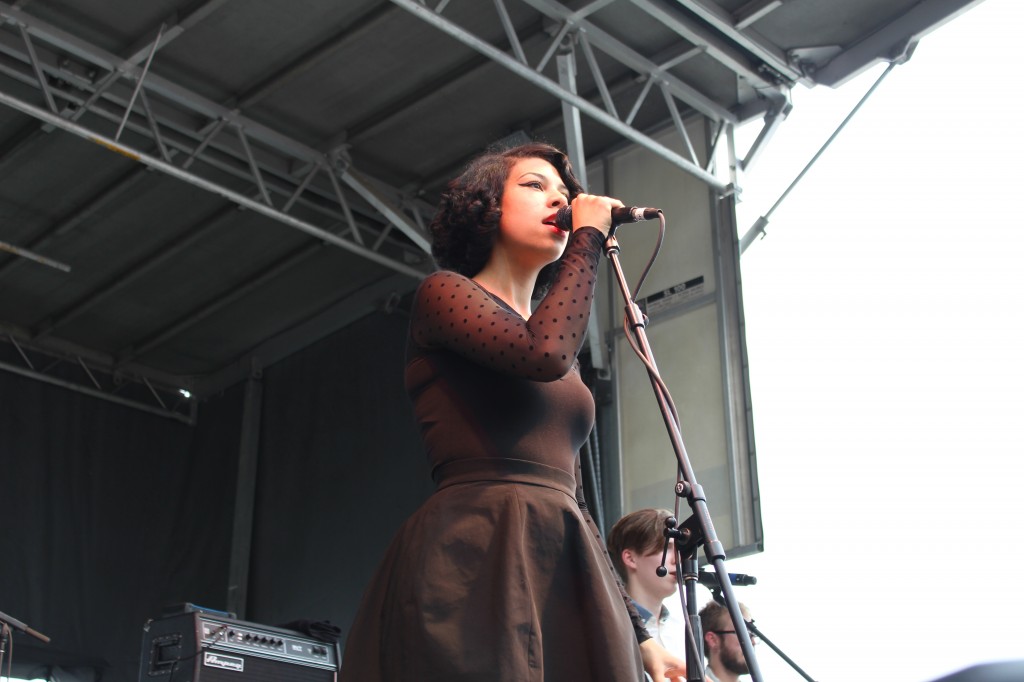 2 thoughts on “Shaky Knees 2014: The Music Festival Atlanta’s Been Waiting For”