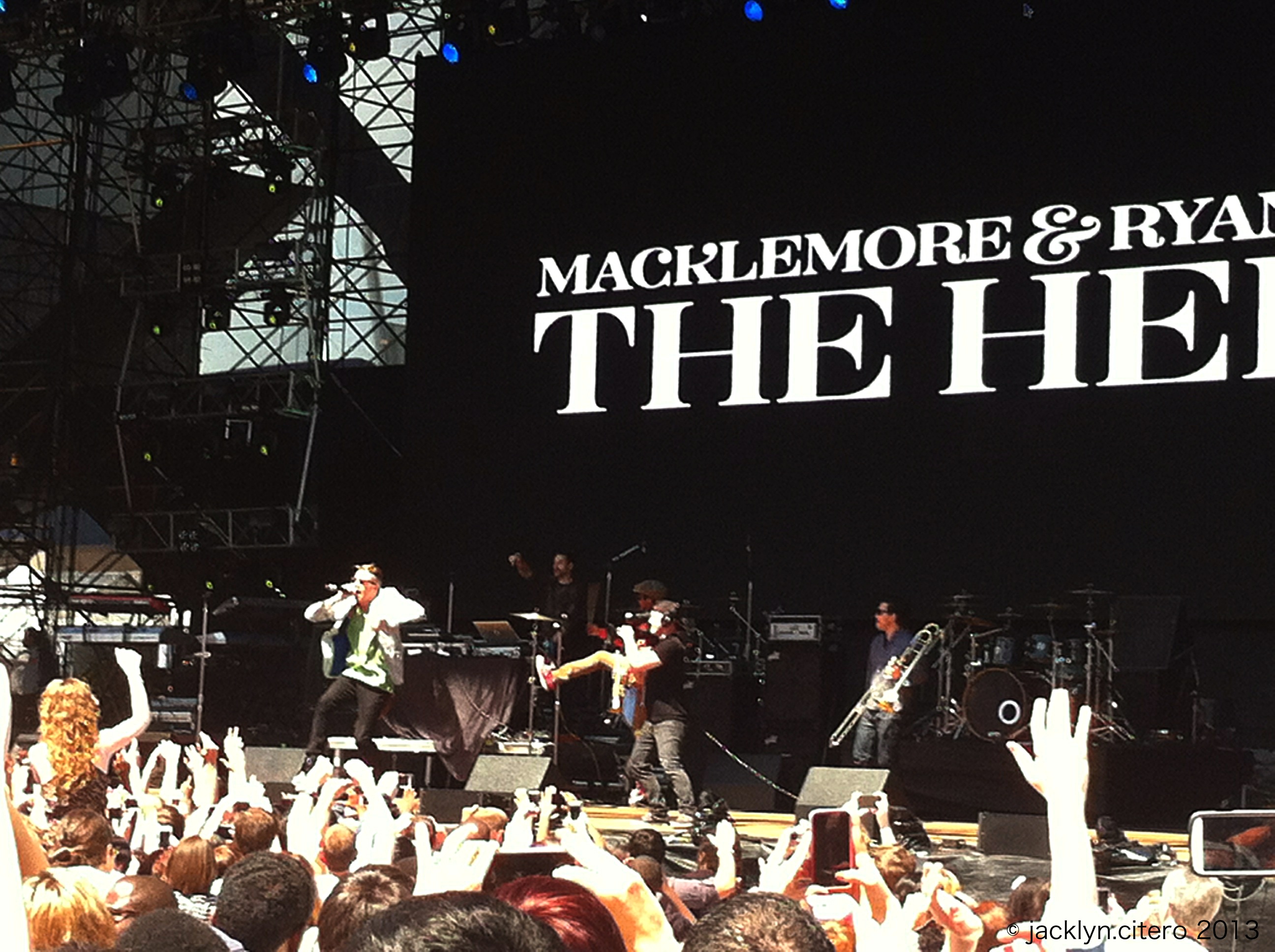 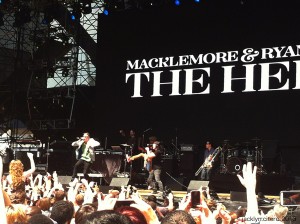 The NCAA came to Atlanta last weekend and in addition to basketball fanatics a like, the  sporting event brought with it The Big Dance concert series. High profile and sought after artists such as Muse, Dave Matthews Band, and Sting headlined the Saturday and Sunday shows in Centennial Olympic Park.

Saturday’s Coke Zero Countdown show kicked off that afternoon with the Athens’ favorite Yacht Rock Revue. Following our favorite ‘70s tribute band, was Macklemore & Ryan Lewis. In addition to making thrift stores popular as ever, Macklemore & Ryan Lewis proved their worthiness in the music spotlight not just by singing about poppin’ tags. The duo started us off with their song “Ten Thousand Hours” later followed by Macklemore (aka Ben Haggerty) draped in his now famous fur coat enthralling the audience with their chart topping hit “Thrift Shop.” That afternoon the crowd was also treated to the fan favorite “Same Love” and the recent hit single “Can’t Hold Us.”

In his hometown glory, Ludacris took the stage after Macklemore and Ryan Lewis. His charisma was the highlight of his performance (as if you have seen Ludacris perform before, you’ve seen it all) before. If his set at the Coke Zero Countdown happened your first time seeing Luda in action, it was a memorable performance as he broke out all the old favorites such as “Welcome to Atlanta,” “Act A Fool,” “Money Maker,” and “Roll Out”. Flo-Rida’s set followed.

The most anticipated act of the evening was of course the infamous MUSE. No surprise that they were headliners due to the NCAA using their chart topping hit “Madness” as the theme for this year’s March Madness. Although they gave us this single early on in their set, they were able to jam pack what seemed to be any song everyone hoped to hear from them into their hour long performance. Their stage presence was electric, captivating, and powerful. So powerful in fact that during “Follow Me” they blew the power (or perhaps just the mix board generator lost power). Following the 20 minutes of silence they continued on and Saturday in Centennial Park ended on a high and ever memorable note.

Sunday was the last day of the music festival and an early arrival to the park proved to be crucial in order to see the headliner of the Capital One Jamfest Dave Matthews Band. Before the park hit its limit of the 30,000 capacity and a small riot outside the park ensued later that day, Blind Pilot started the concert early that day followed by the ever loved Grace Potter & The Nocturnals. In her staple sparkling ensemble and spunky stage attitude she enchanted the audience with her ballads of “Stars” and my personal all time favorite “Apologies,” and then amped up the energy with the sounds of her single “Paris” and “Medicine.”

Sting took the stage next mixing in some Police favorites along with some of his top hits. He opened his set with “If I Ever Lose My Faith in You” and then into “Demolition Man.” A Few songs later the audience was singing a long with “Fields of Gold,” “Message in a Bottle,” and “De Do Do Do, De Da Da Da.” He closed out his set with “Roxanne” and soon encored with favorites of “Desert Rose” and “Every Breath You Take.”

Dave Matthews Band closed out the music festival and they did so with an energy that reminded me of their Central Park show in 2003. The Jamfest show from last weekend was reminiscent of this throwback due to both shows having the same opener “Don’t Drink the Water,” or perhaps DMB is just as good as they ever were. Their set was an all night jam fest that included crowd favorites of “Crush,” “Jimi Thing,” “Mercy,” and the ever loved “#41”. DMB brought the pure heat with their encore of “Two Step.” Whether you were in the front row or standing outside on the sidewalk after being shut out, anyone in the area of Centennial Park that night heard something special, and I couldn’t think of any better way to end this music, and basketball, filled weekend.