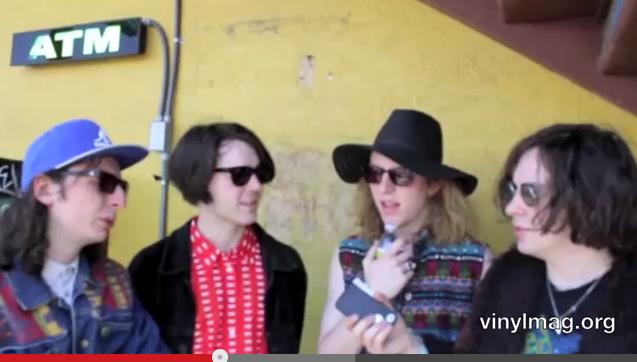 You’ve probably heard of PEACE by now.  This British quartet are making serious waves in the music world, and we can’t get enough of them.  They’ve been called the future of indie rock – although, as you’ll see in this interview, they don’t consider themselves to be “indie.”  Either way, they are “the future of something.”

I was able to catch up with them for a few minutes after a morning showcase at South by Southwest to talk a little bit about what drives the music, their boredom, and who they enjoyed most at SXSW.

They are men of few words, but honestly, I wouldn’t have it any other way.  They are the perfect caricatures of true rockstars- they give the impression that they genuinely don’t care, and it’s not a facade.  They prefer to let their music speak for them.  PEACE is a group of musicians, and they don’t feel the need to be anything else.

Their album, In Love, just dropped yesterday, and we’ve already run through it several times.  Be sure to check it out right after you check out this interview.