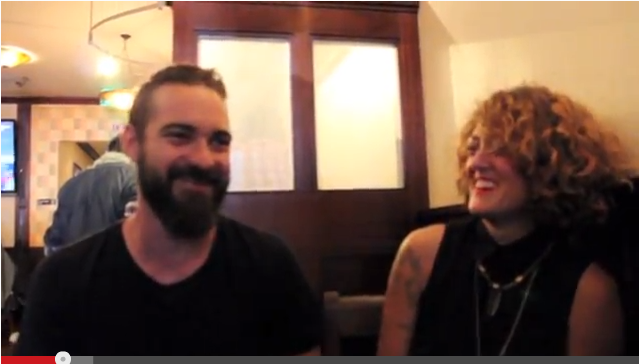 Ginger & The Ghost is one of my absolute favorite South by Southwest finds.

Not only were they some of the most friendly, personable people I’ve gotten to talk to, but they are also enormously talented.  Seeing them perform live feels like a privilege, almost as if the audience is being granted an exclusive chance to view them in their natural habitat.  Usually I feel the overwhelming urge to sing along when I see a live show – this is one of the only ones I have seen that made me want to hush and unblinkingly observe the artists in front of me.

Missy (“Ginger”)’s voice is not of this world, and as you listen to her, you can’t help but think that she was made for this…actually hand crafted to be doing exactly what you see and hear.  Her talent is real.

Dan,  “The Ghost,” manifests himself in a way that perfectly befits his title.  He stands beside Missy with a ghostlike omnipresence, but that by no means implies that he fades into the background.  He seems to be haunting the stage as he plays, and he is undeniably felt.

Only Ginger & The Ghost could make an audience forget that they are in a small, unassuming bar in the middle of 6th Street in Austin, Texas and transport them into an otherworldly galaxy (one that I’m eager to return to).

So there you have it. Amazing band. Awesome people. So before you bolt off and scoop up their EP (which came out March 15!!), go ahead and check out this interview first!

2 thoughts on “SXSW with Ginger & The Ghost”