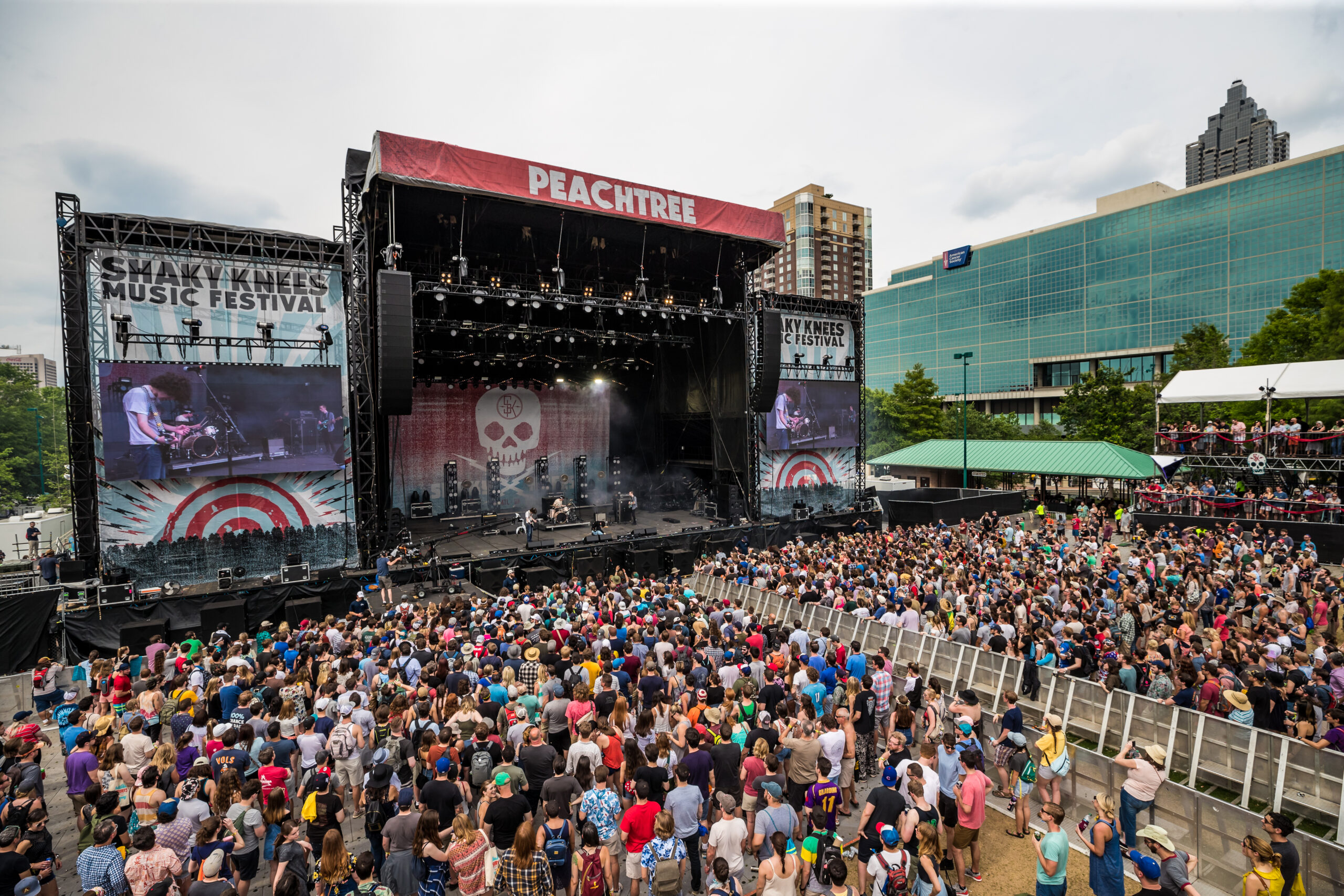 Day One of Shaky Knees kicked off bright and early with a set from Cymbals Eat Guitars over at the Ponce de Leon stage.  Not a bad way to jump start your day, with front row head-banging right at the crack of noon.  The lineup for Friday was overwhelming in the best way, with no down time from one kickass band to the next.  We’re genuinely surprised we even found time to eat anything.  We ran straight from Cymbals to Zipper Club, then on to Temples followed quickly by Margaret Glaspy (hero), and from Glaspy we hauled over to Car Seat Headrest.  Post Car Seat at the Peachtree Stage, we made it to The Growlers on the Piedmont Stage for half a set, and then booked it back to Ponce to catch everyone’s new favorite band, Pinegrove.

Pinegrove’s set was one of the most anticipated of the day for us (although, with this bottomless smorgasbord of fantastic artists, it was hard to choose which set to get the most pumped for), and we weren’t alone.  Though the Ponce stage was the smallest of the three, the New Jersey band commanded a crowd, and personal space was impossible to find.  The six-piece folk rock band took us through most of 2016’s Cardinal, only leaving off third to last track “Waveform,” which…yeah, we get.  Even though we’re probably never going to see them play our favorite track “Peeling Off the Bark” from 2015’s Everything So Far, they did pull out “Angelina,” “Problems,” “The Metronome,” and “Recycling” from their debut release, so we were more than satisfied.  They also played big guns “Old Friends” and “Aphasia,” and ended with our latest on-constant-repeat obsession “New Friends” for the finale.

From Pinegrove, we settled in at the main (Peachtree) stage for Wolf Parade, followed immediately by Portugal. The Man, and then Cage The Elephant.

Matt Shultz’s presence as Cage The Elephant frontman Friday at Shaky Knees is not the first time that crowd chatter has compared him to Mick Jagger. Shultz’s stage presence is memorable, to put it lightly. While he isn’t exactly Jagger, he has surely proven himself as an epic (and we don’t throw that word around too often) performer time and time again. Cage’s Shaky Knees set was mega high energy and captivating.

Post-Cage, we fought our way to a good vantage point at the Piedmont Stage for Pixies‘ set, which was a lot easier to obtain after a third of the crowd dispersed halfway through the set once the band finished “Where Is My Mind?” (really, guys?).  Side note: bless Shaky Knees for booking the Pixies for two years, first in 2015 and again this year.  Anyone who missed this set made a huge mistake.  We’re still reeling.

Legends in their own right, headliners LCD Soundsystem took the stage Friday night of Shaky Knees like the kings of electronic rock they are. They walked onto the stage to the Peech Boys’ anthemic “Life Is Something Special,” a fitting opener to one of the best and most highly anticipated sets of the weekend.  James Murphy then commenced orchestrating a giant festy dance party as the group worked through a setlist that catered to all, especially lovers of their debut self-titled and 2007’s Sounds Of Silver, breaking down into a beautiful, swaying close with “All My Friends.”

Day Two was definitely the slower day of the festival, on top of being the rainiest of the three. (Though to be real, it only seriously rained for about five minutes and was a welcome refresher from the heat.)  While Friday and Sunday both boasted lineups that were destined to have us well over our daily “steps” goals with all of the time-overlap sets we’d be running to, Saturday’s offerings gave us a little more down time to catch some shade or, you know, actually taste the food truck fare we were scarfing down.

The day started promptly at noon again, this time over at the main stage for North Carolina duo Flagship followed by LA’s The Record Company, and then on over to the Piedmont Stage for British pop singer Bishop Briggs, who you may recognize from her mega hits “River” and more recently “Wild Horses.” Since “River” first released in January 2016, Briggs has been rapidly climbing the charts. While her soulful performance was a great introduction for new fans, we would love to see Briggs break away from sounding exactly like her recordings and bring something extra to her live performance. We’re super excited to see what is in store for the emerging artist, and we’ll be keeping an eye on her for sure.

Dr. Dog was the most anticipated set of the day for us, and we posted up at the Piedmont Stage to catch the psych rock band for their early evening set.   The band took the stage and wasted no time on teasing the audience, launching right into fan favorite “How Long Must I Wait” off of 2012’s Be The Void, later on also gifting us with tracks “That Old Black Hole,” “These Days, and “Heavy Light” from the same album.  The rest of the set consisted of a good mix of their catalog, surprisingly lacking heavy focus on this year’s Abandoned Mansion and also exploring 2013’s B-Room as well as 2010’s Shame, Shame, with a couple of tracks from 2008’s Fate and last year’s The Psychedelic Swamp for good measure.  They closed the set with their signature cover of Architecture in Helsinki‘s “Heart It Races.”

Day Three was a beast.  Starting off with Hoops at the Piedmont stage at 12:30 p.m., it’s hard to pinpoint what the highlight of the day was between sets from Whitney, Hamilton Leithauser, Fruit Bats, Third Eye Blind (might be a real contender, because #nostalgia), The Shins, Ryan Adams (who basically just made fun of The Shins the whole time), and Phoenix.

That said, we’re a little bit nuts for Fruit Bats over here, and we were front row rail for the entire set, taking enough videos to make our phones complain that we were running out of storage.  Our obsessive fandom was rewarded later on during The Shins’ set, when Fruit Bats frontman Eric D. Johnson (former member of The Shins) jumped in with them on tambourine.

Despite personal favorites, it has to be acknowledged that Phoenix was genuinely, indisputably incredible.  Their hour-and-a-half set was masterful, complete with the coolest backdrop we’ve ever seen—a slanted mirror aerially reflecting the stage below, with the floor projecting trippy visual effects.  The entire surrounding crowd was near hysteria throughout the entire show up until their encore which included—obviously—2009’s smash hit “1901.”

We’ve talked about this before, but we are all about the sustainability factor of refillable water stations in lieu of plastic bottles, and Shaky Knees was one of the first festivals we ever saw implement this system.  We’ve been seeing this more and more on the festival circuit, and we’re so glad that it’s becoming a best practice.  Shoutout to Shaky for being proactive here.

Also want to note that Centennial Olympic Park is a great location.  When they hosted the festival at Central Park in 2015, we thought it was perfect and wondered if it could get any better.  Plenty of shade, stages far enough apart that their sound didn’t step on each other…it seemed like the ideal spot to plant this festival, and when we heard about the move in 2016, we were skeptical.  It turns out our doubts were unfounded.  Yes, Centennial is a smaller park, but this didn’t, as we worried, result in overcrowding.  There were less stages than before, but this mainly resulted in easier transition from stage to stage without feeling like you had to leave a set 10 minutes after arriving in order to be on time for the next.  In short, this festival is excellently planned, and runs like clockwork.  We’re believers.

Since its inception, Shaky Knees’ consistently stellar lineup has made it stand out, and it remains one of our all-time favorite festivals, from soup to nuts.  The bottom line is, the lineup is always unbeatable and, more importantly, uncompromising.  Keep it up, guys, and we’ll keep insisting that this is the festival that should not be missed.