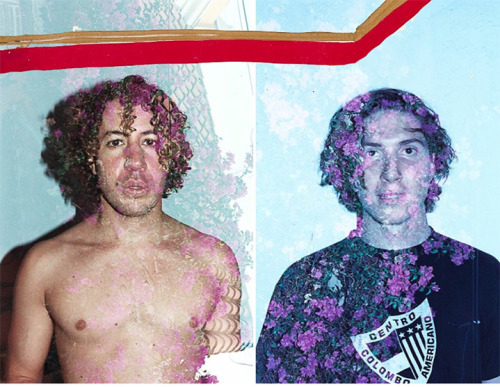 A couple of years ago you would have found Rockaway Beach’s Lewis Del Mar busking on Austin’s street corners and playing in some guy’s backyard during SXSW. But that was then. Now, you will find this duo in great demand and performing in packed out venues such as Hype Hotel.

We met up with Danny Miller and Max Harwood, found a stoop (because that’s where cool SXSW interviews take place), and had a late afternoon chat about the sonic collage that is Lewis Del Mar’s music, best eats of SXSW 2016, and we tried, unsuccessfully, to get the release date of their upcoming album.

Vinyl Mag: Let’s talk about the EP that you guys just released… Describe the EP in three words for someone who’s never listened to your music before.

Danny Miller & Max Harwood: Bedroom, I think should be one. City. And, I guess we’ll say beach. Yeah, I guess ocean. Yeah, ocean is better. Bedroom, city, and ocean. Which I think are sort of the locales and time of the record.

DM: We recorded it in Max’s bedroom. And we live in Rockaway Beach. We actually recorded it in this bungalow. And I think Rockaway is sort of the coming together of these two disparate worlds.

DM: So we’re trying to convey that in what we do creatively.

VM: Absolutely, cause I know you guys made the move from D.C. to Rockaway, so what prompted that?

DM&MH: Such a long story.

DM: I think we came to pick Rockaway because we felt like it sort of embodied what we were already  trying to do creatively with the project. So we moved from D.C. because we had an old group and it disbanded, and it was sort of Max and I at the home of it and we wanted to do something else creatively. We’re from D.C. so we could have moved anywhere in the world and I think it would have been more interesting. It was just sort of an idea of getting away from home. We moved to New York. We moved to a Spanish- speaking area in Brooklyn. And that sort of… it sort of started a lot. My father’s Nicaraguan… Max’s parents live in Panama now and we lived in Chile for a while we had very strong ties to South America, Central America. And it just sort to began to influence the music in a way we weren’t really expecting. And we started to tap into a lot of those things and I think that while I was tapping in to that part of my heritage personally and those influences musically, Max was sort of tapping into something else in moving into New York.

MH: Just sort of like the intensity of the city. In the old band I was basically just the drummer and it was just sort of like a regular rock-n-roll type of band, and we started this project and I got into production and sampling and hip- hop and all these different things. Now it’s just amplified like a thousand times when we moved to the city. You know there’s just so much humanity and you come face to face  with so many experiences and cultures that I just started bringing in different sounds into what we were doing and starting sampling; sampling from vinyl, picking up sounds around the city with just a voice memo recorder.

DM: I think that sort of when we started to fuse those two worlds together we were kind of going out to Rockaway to surf, hang out with some friends there. It just sort of began to us to manifest itself into the more physical and locational properties of the music. So we just moved there. We sort of had to live in to make it come to life. And that was sort of the goal.

CH: If this sounds like a crazy collage of things, its because that’s exactly what it is.

VM: That’s great, that’s what helps make an album I think. All these things coming together to make one.

DM: Right, I think when we finished the other band we were looking for something different we were curious about other sounds so we just opened ourselves up to any and all influences and all these different things flooded in.

VM: So we are anxiously waiting on the new album. Do we have a date?

DM: Nothing we can say…This year.

VM: Can we expect the album during beach weather months?

DM: We can’t say. We’re finishing it right when we get back. All the songs are written. Everything’s been recorded. We’re just kind of fine-tuning it. We have sort of an excess amount of time on our hands so we’re just sort of taking our time with it and making sure it’s something that were really proud of as a first statement for our band. It’s been such a process of love and nurturing and learning for us because this is our first time making a full length album so it’s been really cool.

DM: Really excited to go to Paris for the first time.

MH: Honestly excited to go anywhere in Europe. I feel like our minds were kind of blown when our manager started talking about sending us to Europe. We’re like oh my God, that’s going to be amazing.

VM: What are some things you guys like to eat on the road?

DM&MH: I just like Caribbean food I love lie coconut rice, and fried fish. On the road I feel like…We try to eat healthy but it’s not so easy. We like Thai. Mutual love for Thai food.

VM: What’s the best food you have eaten at SX so far?

DM: I had really delicious Caribbean food. It was like sautéed pork over some… like oh it was crazy it was coconut curry bacon fried rice.

VM: Oh man! Where did you find this?

DM: It was this taco truck.

VM: So is there anything else you guys want to share?

DM: I just want to say that this has been the most amazing thing, and as two kids that have known each other our entire lives…we’ve been making music together our entire lives. Like before this Max and I were traveling around in a station wagon and sleeping on floors and shit so to have anybody care about our music and to come here, and this sounds so stupid but to get a wristband to play at these showcases, like we were here two years ago and we were busking on street corners so…

MH: We literally played in some dude’s backyard two years ago.

DM: And there’s just not a second of it that’s just the most amazing experience and to be able to do it with your best friend is the greatest thing.

MH: Yeah, we’ve known each other since we were 9.

VM: I think remembering where you came from keeps you humble.

MH: And it gives you perspective. Its so nice to have someone to bounce ideas off of, and just like, when we have to make decisions that are sort of heavy, there’s someone there that you also feels like knows you sort of as well as you know yourself.