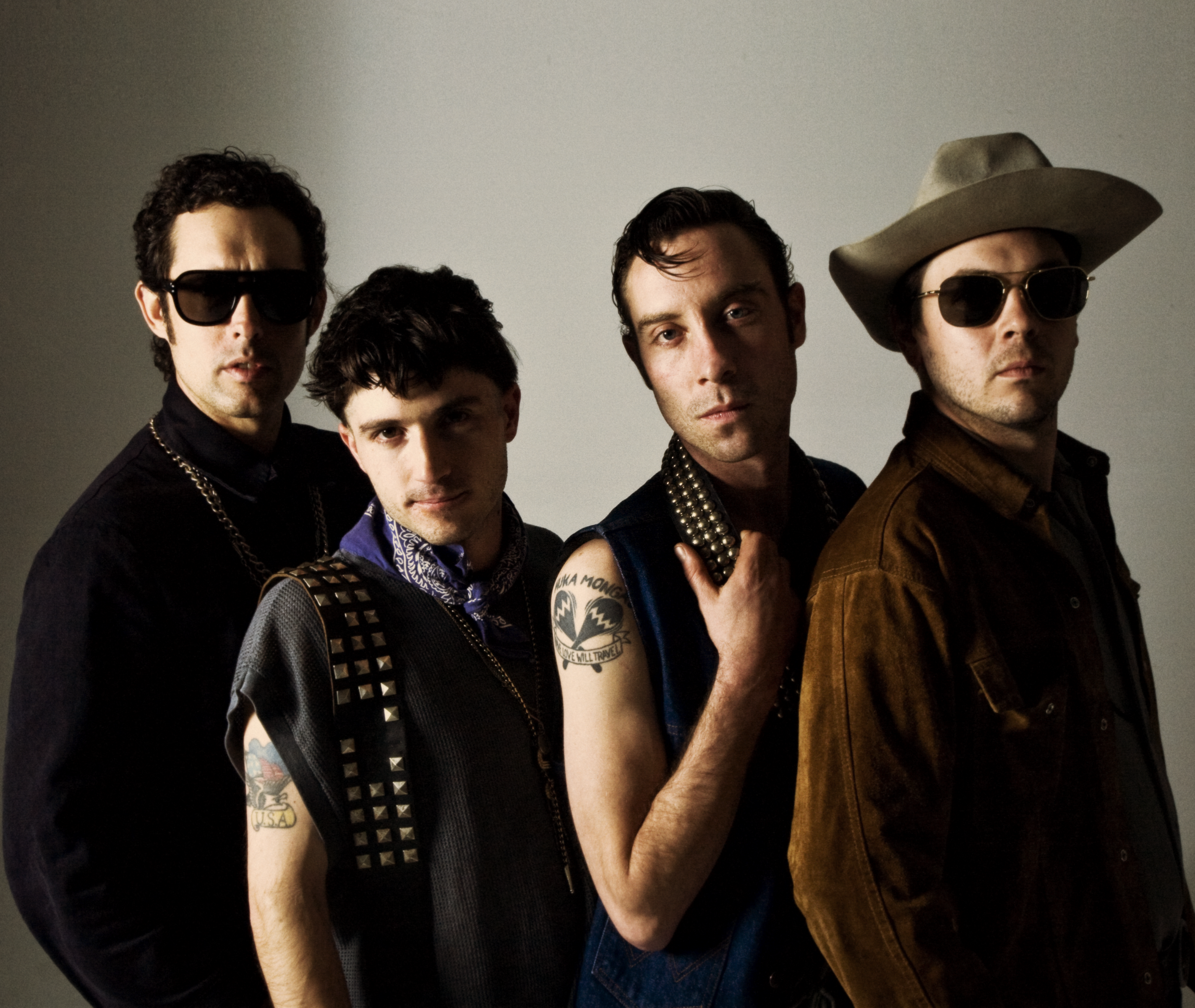 The line to the 40 Watt curved down Pulaski Street as people waited for the doors to open. Those who RSVP’d ahead of time were sent to a Red Bull Sound Select representative and given free chocolate chips cookies and foam black lips. Once inside, Muuy Biien performed an enthusiastic show and set the hardcore, punk mood for the rest of the night. Front man, Josh Evans brought the energy and the fun with his animated dance moves. After Muuy Biien, people migrated to the bar or outside for a cigarette. Even the boys of Muuy Biien made their way to ground level as fellow Black Lips fans. We weren’t outside for more than 30 minutes before my friend points out Black Lips’ singer, Cole, and the band’s female saxophonist walking by. It was an occurrence that seemed so surreal at the time, to be that close to performers dressed in their punk garb and makeup. Shaky Knees was a completely different experience; fans leaned over metal gates and bodyguards in order to reach for the Black Lips. The 40 Watt is much more intimate, eliminating the barrier between the audience and the performers. It’s not uncommon to see band members mingling among the audience with a PBR in hand or partaking in the chaos that is the mosh pit. 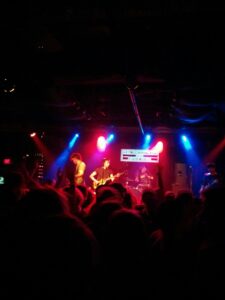 Finally, the seemingly misplaced 50’s standby music abruptly transitions to the rough and raw guitar sounds of Black Lips. Opening with “Family Tree,” the band wastes no time in amping up the energy. Cole gracefully trust falls onto a tightly packed group of audience members, and is just as gracefully placed back on stage. I vigorously nodded my head and bounced in the back of the crowd. The band recently included a female saxophonist that brings a new layer to the band’s sound. Although she is only present for a few songs, her power gives the songs new life. Its no secret that punk-rock shows can be overwhelming; one doesn’t come to a punk-rock show to sit in the back and not get pushed around. I think the genre is successful in generating an energetic crowd; as long as the performers are screaming into the mic and jumping around on stage, the audience is bound to follow. The genre gets back what it puts in. Have you ever been to a rock concert and not been able to dance? It’s hard. I think the same concept goes for any genre, but the punk-rock genre is all about creating chaos and instilling a rebellious mindset in its listeners. 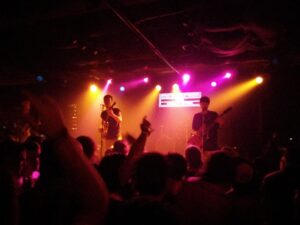 It wasn’t long before I saw my girlfriend crowd surfing a few bodies in front of me. She was so close to the stage that I think Cole looked her square in the face. A few girls gabbed back in forth in front of me, a few even checking updates from Instagram as the band played “Boys in the Woods.” I couldn’t go to a Black Lips show at the 40 Watt and remain in the safe section. People started to filter out of the crowd, making their way to the calmness of the bar. The aggressive moshing and flying toilet paper rolls were too much to handle, but I grabbed my friend by the hand and pushed our way closer, eventually reuniting with my crowd surfing friend. I knew the concert was coming to an end, and I also knew I would regret it if I didn’t enter the ominous mosh pit. I asked my crowd surfing friend to come with me, which she agreed to without hesitation. As we pushed our way into the pit, the temperature immediately climbed 10 degrees and the humidity was enough to stifle my breath. Once in the center of the pit, my legs and arms became pinned to my body. It took all the power I had to pull an arm up for defense. I finally got my head up enough to see Jared’s sweaty, red face and the veins popping out of his neck as he belted out “Bad Kids.” In a blur, I see a guy jumping off the stage, and it’s my job to catch him. Immediately the impact takes my friend and I to the floor. I was surprised to feel people reaching for me, helping me up. It wasn’t long before the weight of so many bodies took its toll, and just as I felt a crushing sensation in my chest and a tingling in my face, I moshed my way out of the pit. 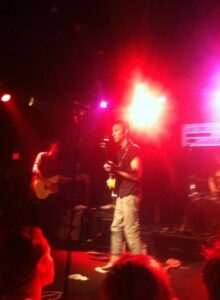 Just as Black Lips ended, the crowd chanted for an encore, and the band willingly obliged. I discovered I’m not much of a mosher, but I was proud of myself for taking a chance. Their recorded songs definitely have a cleaner quality, but there’s something about the rawness of a blood-curdling scream and the feedback of a guitar that gets to the heart of the audience member, physically. If you’re heart isn’t racing at a Black Lips concert, you’re either in the bathroom or passed out.