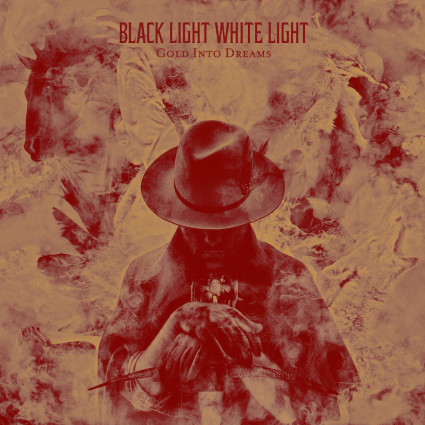 Three years after their debut in 2011 with Infrared Daylight, Black Light White Light release Gold Into Dreams, a continuation of their vintage, psychedelic rock style. The Danish trio consists of singer/guitarist, Martin Ejlersten and brothers, Adam and Tobias Winberg. Think Jet but more intimidating, and much more badass.

With Ejlersten’s rough and raw vocals, along with the band’s echo effects and layers, Gold Into Dreams oozes sensuality and high energy. In addition to the album’s digital release, Black Light White Light has also produced a “Gold Digger” fuzz guitar pedal with USB socket and cable to download the album…figure that one out. The pedal seems to embody BLWL’s style perfectly: simple gold on red with a 70’s design and typography.  On top of that, Grammy-nominated producer Chis “Frenchie” Smith (Meat Puppets) largely contributed to Gold Into Dream’s production. How much cooler can you get?

The album opens with “High Like A Hurricane,” debuting BLWL’s signature style with ethereal vocals and a subtle western guitar style that becomes more prevalent in “Sex And Fury.” To match the vibrancy of “High Like A Hurricane,” the music video exemplifies Gold Into Dream’s artistic nature. Black and white imagery of the band layered with transparent images give the video that hallucinogenic effect that comes with their psychedelic style. Light and dark imagery contrast, appropriately, and reflections and collages give the video an art deco style.

“Gold Into Dreams” follows with a soft, dreamy sound. Delicate guitar picking creates a relaxing folk style. “And The Devil” also stays on the slow side but incorporates the sitar, which echoes The Beatles’ “Across the Universe” and “Within You Without You.” BLWL gives it their own stamp with background violins and unique vocals.

“Aim A Little High” takes the album back to the 90’s with a hazy rock effect that gives the album its vintage vibe. The track has an upbeat, optimistic sound that continues into “Revolutionary Sound Squad.” The western guitar style mentioned in “High Like A Hurricane” ends the album in “Fade Out,” which combines with their Beatles-inspired sound.

Although Gold Into Dreams is considered part of the rock genre, BLWL does a good job of keeping a balance between loud and relaxing, which I think is the point of the psychedelic genre – finding a middle ground, creating feng shui, etc. Ejlersten’s light vocals and the band’s unity do just that.

Gold Into Dreams is a conglomeration of eras and instruments and, ultimately, shows BLWL’s growth from 2011. This combination of sounds comes together perfectly to create one sound specific to BLWL’s artistic style.