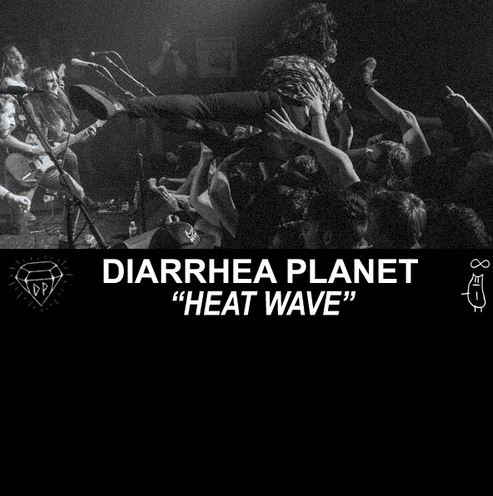 Nashville band Diarrhea Planet recently dropped a new track in preparation for their upcoming album, Aliens in the Outfield.

The song, “Heatwave,” is a truly hot three minutes full of alternating beats. The song starts off with the signature DP medley of guitars that’ll make you feel as if you stepped into a rock stadium. The song continues into a calmer and lighter beat around the one minute mark, and after a brief minute or so, jumps right back into the hard rock guitar session.

The track actually makes you feel as if you are experiencing a heat wave – if you’re from the South, you know what that means – taking you from a blood rush to calm and right back to a racing heartbeat.

In the exclusive release via GuitarWorld.com, guitarist/singer Jordan Smith explains the meaning of the song:

“‘Heatwave’ essentially is a song about crowd-surfing based on my personal experiences with two friends…the first half of the song is about the first time we crowd-surfed one of my best friends in college, and how exciting it was to see her up there getting tossed around by the crowd…the second half is about a close friend of mine who passed away and was known for crowd-surfing a lot at shows in Nashville. The quiet part of the song is basically me saying everything I wished I could have said to him before he died and didn’t get a chance to say…it’s me apologizing for being distant and unable to share my thoughts and feelings with him when I should have been opening up to him and being a better friend, and how I’d give anything to have him back crowd-surfing with me.”

Diarrhea Planet have spent the past year on the road and have been seen at festivals including SXSW 2014 and Gov’s Ball and will be back on tour alongside JEFF the Brotherhood.

Their album, Aliens in the Outfield, will be available November 18 on vinyl and download via Infinity Cat Recordings.

Also be sure to stay tuned for our upcoming Vinyl Video with the band! TEASER: We talk a lot about Hanson.