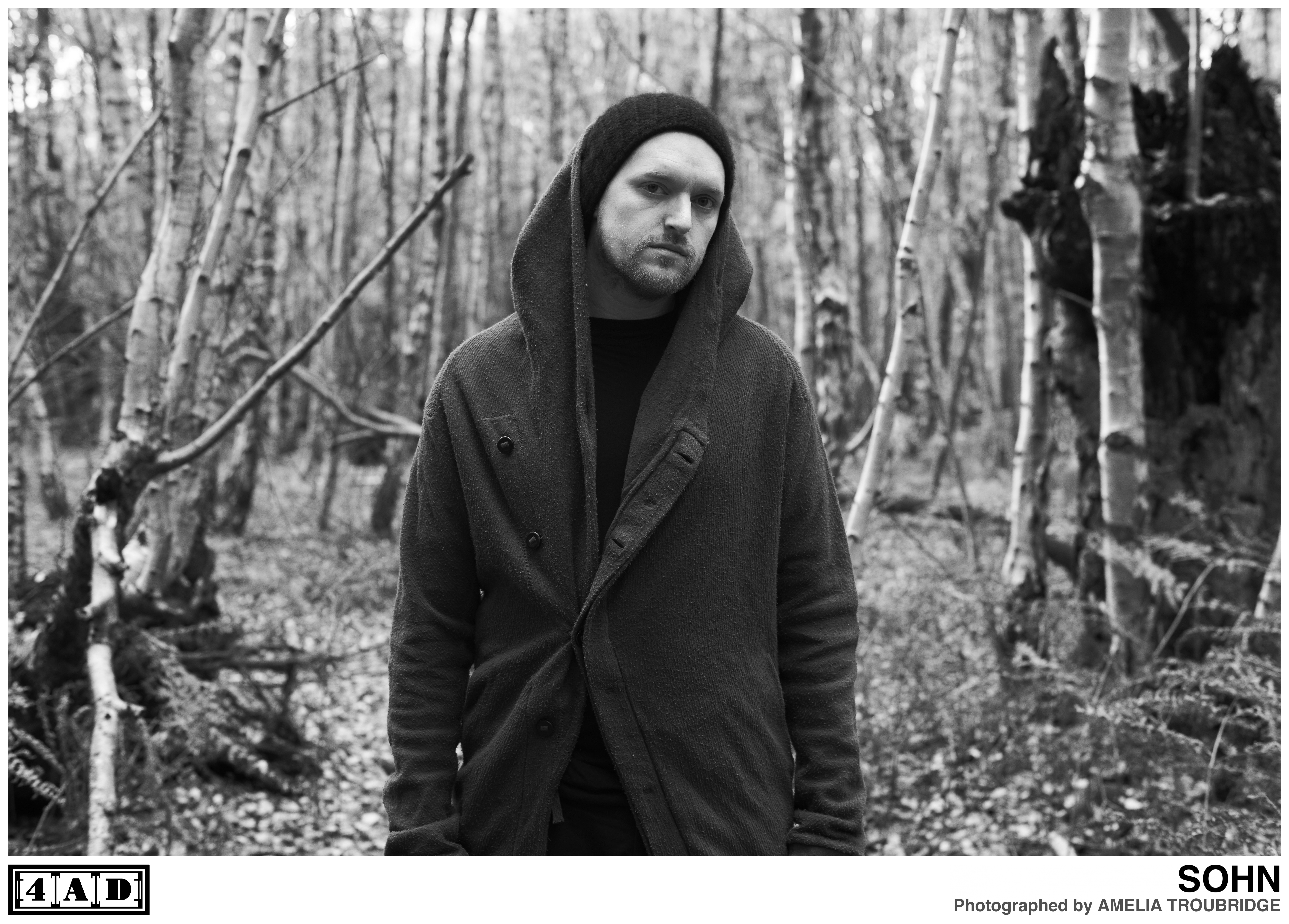 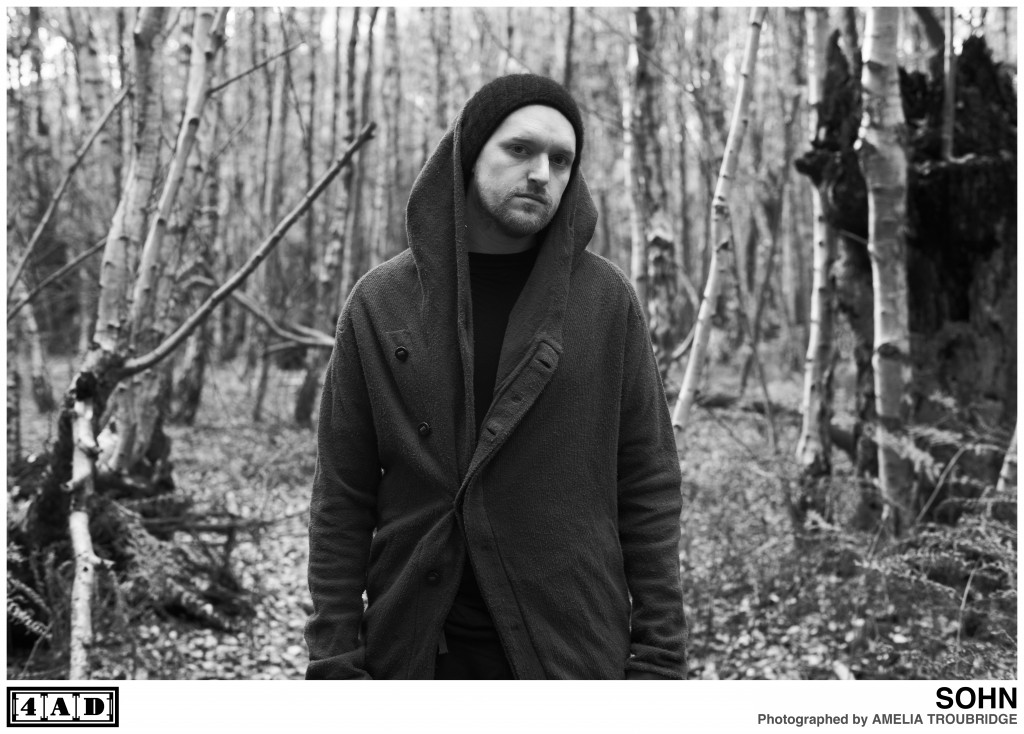 SOHN, aka Christopher Taylor, is making moves on the charts. The singer, songwriter, producer and musician from England has just released his new record Tremors, along with a series of video sessions with his label, 4AD.

SOHN sounded absolutely thrilled about the new album. “I think a lot of people – especially in the States – a lot of people have an idea of me as a producer or a remixer,” he said during our Skype interview on his day off in Cologne, Germany, but this album features his vocals and songwriting on every track. “Actually, first, I’m very much a singer and a songwriter on the album.”

The release of the new record happens to coincide with the one year anniversary of SOHN joining up with 4AD records. What does he like most about being with the label? “With 4AD, they’re very much like, ‘we’ve signed you for whatever you decide to be, so it’s your call’ basically, which is great,” he said.

When asked about his songwriting process, SOHN revealed that inspiration often comes to him while on the go. He writes down these ideas on whatever is available—phone, notepad—and goes into the studio to turn those ideas into music. “It’s only at the end of the song where I really get to know what the song is about, or what it’s saying” he said.

The album is reaching early success in the UK and Australia, but SOHN is very humble. “I wasn’t prepared for and I didn’t really understand that there were people in these countries that even knew anything about me,” he said laughing, “So that’s been really mad.”

Vinyl Mag: Where are you off to next?

SOHN: We’ve got a show here tomorrow, and then I have no idea…I’m not really keeping on top of all that stuff right now, just doing what I’m told to do.

VM: It’s been about a year now that you’ve been with 4AD, right?

VM: So how has that experience been? How has that influenced your art and music?

SOHN:  The label trusts in the artist that they signed to do whatever they think is right…which is an amazing situation to be in with quite an international label. I see it a lot working with major labels for other people…that process can normally be quite difficult…but with 4AD, they’re very much like ‘we’ve signed you for whatever you decide to be, so it’s your call’ basically, which is great.

VM: So, what are we to expect from Tremors? How is this new and different?

SOHN:  Every track on the album has my vocal on it…I think a lot of people, especially in the States, have an idea of me as a producer or a remixer…actually, first, I’m very much a singer and a songwriter on the album.

VM: Take me through the songwriting process – where do you begin,  and what inspires you?

SOHN: I normally start while I’m moving. If I’m en route somewhere or walking around somewhere, or driving around somewhere, then a lot of the time, a melody, or some kind of musical motif will sort of come into my head. And I’ll just record that on anything I’ve got around me at the time – say my phone, or whatever – and then I sort of build up a small catalog of those – maybe about 10 – and then when I get the chance, I’ll go into the studio and just play with the ideas starting with the strongest motif first. And then I kind of go into a bit of a daze, basically…then whenever I sing, it starts to form words by accident, and then I try to construct the lines to make use of those words…it’s only at the end of the song where I really get to know what the song is about, or what it’s saying.

VM: I was watching your videos for “The Wheel” and your 4AD sessions, and I was reading about your friend, Andreas Waldsheutz – tell me about that relationship and those videos; I heard they were [Stanley] Kubrick inspired.

SOHN:  [Andreas is] awesome. He’s a fashion photographer friend of mine in Vienna…we’ve just always been friends, and his work has continued to get better and better…I knew that whatever he would do would be amazing to look at. We worked very closely. We decided what we were going to do and came up with the concept…we had two days shooting, and all of the ideas [we originally had] just totally changed…and I’m absolutely delighted with the way that they’ve all come out…I think that it’s so strong visually.

VM: What are you looking forward to most on your upcoming tour, and in the future of releasing your album?

SOHN:  I’m looking forward to the realization that people have actually been thinking about my stuff without me really realizing it, [laughing] because the album [just came out], and it’s started hitting charts everywhere, and I had no idea. I had no idea that there were people out there ready to buy this album, or that were interested in it, or that were talking about it. Since today, I’ve really started to see that happen. You know, you’re going straight to the top 20 of the iTunes charts in the UK, and all these things…I didn’t really understand that there were people in these countries that even knew anything about me, so that’s been really mad…this show in Cologne is nearly sold out, and I’ve never once been to Cologne.

VM: What about Spotify? What about these web streaming services? How have they affected your music?

SOHN:  My feeling about that…especially when launching your career, is that the more your music is available, the better. I don’t really want any medium of listener to try to find my music and not be able to find it…you kind of have to realize that and get on board, or very much swim against the tide of how people are likely now to reach their music.  I wouldn’t purposefully not put my stuff on those services just to stop those people being able to get it for cheaper or for free, because for me it’s just more important that those people can hear the music. I think that we start to learn that, in music, there are different revenue streams available, which don’t necessarily mean that people need to pay for music in the same way they used to anymore. You still have the touring and a million possibilities of other ways to keep afloat as a musician.

VM: If you could play a show with any one artist, living or dead, who would it be, and where would you perform?

VM: Would you consider them some of your musical influences? Who else has influenced your music?

SOHN:  Yeah, definitely. Like Tom York was a big influence on me when I was a bit younger, particularly. The Knife was a pretty big influence on me – a lot of things about them. And even down to Paul Simon, actually – I really like his way with words, and so that’s kind of something I grew up to know.

VM: What would you say is the hardest part about making electronic music nowadays?

SOHN:  Probably people thinking that you’ve constantly got to be breaking some kind of barrier, which is not always possible, and not even always what you want to be doing…there’s definitely a snobbery in electronic music. It’s difficult to know when you’re going to fall on one side or the other of that snobbery [laughing], and there’s no real rule to it. From one source, you might be considered a really important electronic musician, and from the other side they might be like, ‘they’re not doing anything groundbreaking enough,’ so it’s difficult.  I’ve noticed, in some quarters I’m seen as revolutionizing some sort of electronic music thing, and the other side, I’m just the opposite [laughing] so you just can’t tell. Basically, I’m just a singer who writes songs and makes music electronically. That’s more who I am. I wouldn’t say I’m an electronic scientist, in terms of the way of making music.

VM: What would you be doing if you weren’t making music?

VM: Walking somewhere? Is that one of your pastimes? Your favorite hobby, just walking?

SOHN:  Well, it would be. If I ever had time, it would be. I mean, I haven’t done that for years and years and years. I like the idea of in some way like a pilgrimage, even if it’s not a religious pilgrimage, because I’m not religious, but this kind of idea of making a journey by yourself based on your own animimalistic possibilities. Like your actual body and your physical self, and just pushing yourself, just doing a sort of four-week hike over mountains and lakes, and arriving somewhere else.