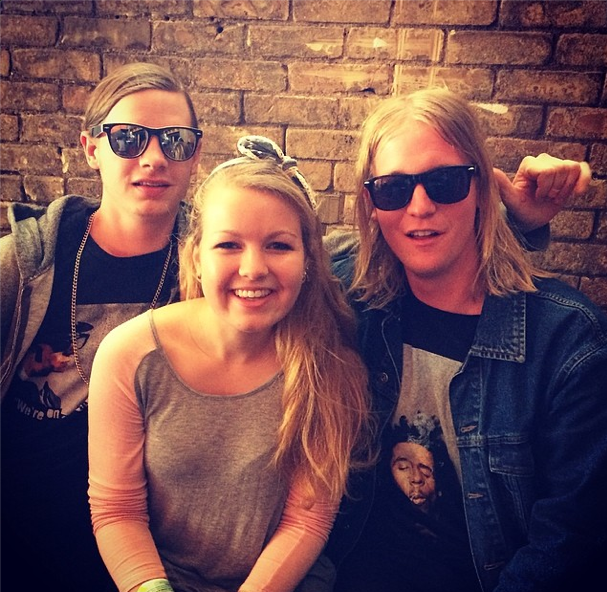 Sol Cat grooved all the way to SXSW from their home base in Nashville, Tennessee, and boy are we glad they did. Filling the airwaves with explosive psychedelic guitars, Sol Cat made an impressive showing at the Austin music festival with several showcases. We were lucky enough to get to sit down with the Johny Fisher (guitar) and Taylor Craft (bass) of the band and talk about their sound, funny stories from tour, and what is next for them.

Vinyl Mag: So you guys have an eclectic sound that brings together different elements from such a range of genres; how would you define your sound?

Johny Fisher: I would say we have a rock ‘n’ roll sound, where we really just like to get funky and groove. There are six of us, and we all have pretty simplistic parts, but we are fooling everyone with so many of us. We really just like to play music that we can groove to and bob our heads. The groove defines us.

VM: You guys have been touring for quite awhile now – any favorite memories or funny stories?

Taylor Craft: Every time we go on tour is great, but we have a running joke where we call Tom, our drummer, anything but Tom. One time we had the people at Chick Fil A people call him Toby, and he had no idea that was him. He is the newest member of the band, so we have to give him a hard time.

VM: So you all played last night at the Thirsty Nickel. How did that go?

TC: Yeah we did; it was our first gig of South by [Southwest] for Big Picture Media. It was kind of nutty, and the sound was out of wack where you couldn’t hear much. But we had an absolute blast playing for a packed crowd.

VM: Any showcases you guys are super pumped to perform?

JF: Yeah for sure! The Big Picture Media showcase yesterday was awesome, and we are really excited to play all of the others, but especially the Audio Tree party tomorrow night.

VM: You guys have been at SX a few days now; any other artists that have really impressed you?

TC: Well, we saw Snoop Dog hanging out, which was really cool. He is such a crowd-stopping guy. But as for bands, most of us are friends, and it is tough to discover new ones, because we are trying to support the ones we know. Also, we roll about ten deep everywhere we go, so that makes it kind of difficult to move around too much.

VM: Do you guys have a favorite city or venue to play?

TC: Laredo, Texas has definitely been one of our favorite spots.  It’s almost like a little mini festival before South by Southwest every year. We are always treated like family there.

VM: What is the song-writing process like for you guys?

JF: We usually write songs part by part; no one writes each other’s either – we all just write our own. When we find something good that we can all agree upon, we build it up from there part by part. It is impossible to go into the studio and record a good record in a week with everyone rushing. Nothing great is made quickly; it’s about sitting on a track and seeing what comes to you with fresh ears.

VM: Would you say your music has evolved, and if so, how?

JF: Yeah, our music has most definitely evolved. We started with two and now we are a six-man group, so that has definitely changed the dynamic of the band. I would say our sound has changed as we have grown up, but if you don’t evolve as a band, you are doing something wrong. We really just focus on not being anything we aren’t, and if something isn’t turning out well, it is helpful to have five others telling you that it sucks and being honest with you.

VM: If you guys could collaborate with anyone dead or alive, who would it be?

JF: Wow, it’s really hard to narrow it down to only one. We are all influenced by such a variety of artists and genres. Our keyboardist really likes hip-hop, and the rest of us are so different as well. But if I had to narrow it down, I would say Willie Nelson, Herb Alpert..really anyone that’s real.

VM: So, what can we expect next from Sol Cat? Any new music in the works?

JF: Yep! We have a whole slew of new tracks sitting in our computer at home. Probably 40 or 50 tracks that we are just sitting on, tweaking. And we probably have about 50 more that we are in the process of making.